We haven't offered a giveaway in some time, so in honor of STEM Friday one lucky winner will receive a copy of the new picture book biography Marjory Saves the Everglades: The Story of Marjory Stoneman Douglas by Sandra Neil Wallace and illustrated by Rebecca Gibbon courtesy of Simon & Schuster/Paula Wiseman Books (U.S. addresses only, please. See Rafflecopter for entry below).

Marjory Stoneman Douglas grew up in Taunton, Massachusetts with her mother, but a one-time visit to her father in Miami sparked her lifelong interest in Florida.

In fact, she moved there after college to become a reporter for her father's newspaper.

After serving in the Red Cross in Europe during World War I, she returned to Florida where she found, much to her dismay, acres of wild land had been drained and burned to build tracts of homes and businesses. She saw how all the unique plants like ghost orchids and Florida Scrub Ziziphus, plus animals like roseate spoonbills, storks and even manatees were disappearing as the Everglades were being destroyed.

Marjory realized how important wetlands like the Everglades were both for wildlife and also for replenishing fresh water supplies. She knew she had to act to save this precious resource. Would she be able to make a difference?

You can see how powerful and inspiring her story is in this book trailer:

Sandra Neil Wallace has distilled 108 year's of Marjory's life into 56 pages of essential reading. The back matter is so full that it has spilled into the end papers. There's an author's note with more facts, resource lists, source lists, and an extensive timeline. Plan to linger there.

Rebecca Gibbon's illustrations capture the lush green vegetation of Florida as well as Marjory's lively disposition. Young readers will delight in finding all the hidden animals and plants in her illustrations of the Everglades.

Marjory Saves the Everglades shows how one person really can make a difference. It will delight both young historians, ecologists, and conservationists alike. Wade into a copy today!

How does the biography of a reporter from Miami fit with STEM? Actually, much of the book is about the Everglades, which are a special kind of wetlands ecosystem. As Marjory wrote, "There are no other Everglades in the world." Let's learn more about it.

Ecosystem – A community of living things and their distinctive environment

Wetland – Ecosystem covered at least parts of the year with either freshwater, brackish water (partly salty) or salt water. Types of wetlands include:

River – A large volume of water that runs downhill.

Rather than a swamp or a marsh, the Everglades is a meandering river that is roughly one hundred miles long and fifty miles wide.  Marjory described it as a "river of grass."

Make a list of some of the animals mentioned in the book or the Everglades park website. Decide whether they are land animals (terrestrial), live both on land and in water (semi-aquatic), or only live in the water (aquatic). 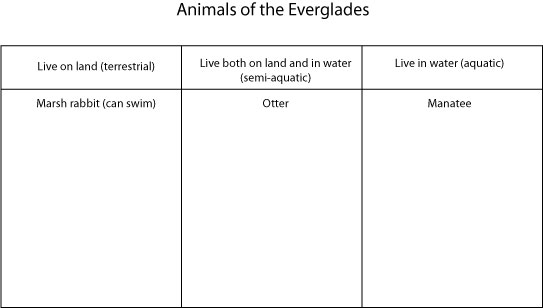 Then make a picture or diorama featuring the animals in their preferred habitats. 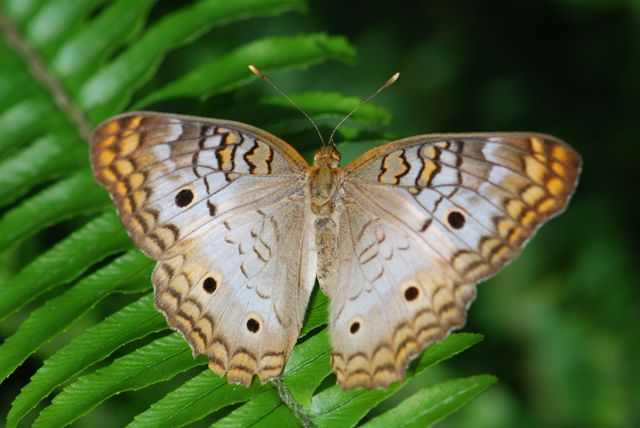 Disclosure: This book was provided by Blue Slip Media for review. Also, I am an affiliate with Amazon so I can provide you with cover images and links to more information about books and products. If you click through the highlighted title link and purchase a product, I will receive a very small commission, at no extra cost to you. Any proceeds help defray the costs of hosting and maintaining this website.

Right in time for Halloween, we have the children's book Amazing, Misunderstood Bats by Marta Magellan with photographs by Merlin Tuttle.

Author Marta Magellan starts by explaining all the ways that bats are helpful, including that bats:

Then she explodes some of the common bat myths, such as bats are not blind at all. Finally, she explains why bats are fun.

We love back matter, and this book has many extra facts about bats, a glossary, selected references, and even an index.

The best part is the amazing photographs used to illustrate the book, many by famous bat scientist Merlin Tuttle.

Bats rest during the day and hunt for food at night. During the warmer months of the year, there are areas where you can watch bats fly out in vast numbers during their evening emergence. Note:  check in advance for any viewing restrictions due to Covid.

A few examples include:

Bring along a notebook to sketch the bats and jot down your observations. Think about how scientists estimate the numbers of bats emerging, and look for common bat behaviors. What do you smell? What do you hear? Can you feel anything, like the air moving due to the bats' wings?

Check out what to expect by watching the bats at Old Tunnel State Park in this video.

Fly on over and see our growing list of children's books about bats at Science Books for Kids. 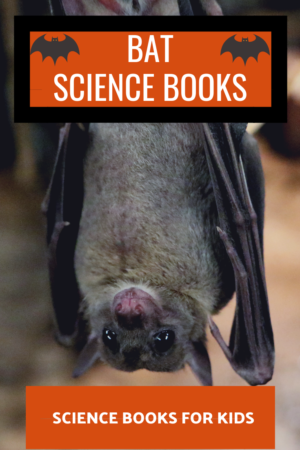 Disclosure: This book was provided electronically by the publisher. Also, I am an affiliate with Amazon so I can provide you with cover images and links to more information about books and products. As you probably are aware, if you click through the highlighted title link and purchase a product, I will receive a very small commission, at no extra cost to you. Any proceeds help defray the costs of hosting and maintaining this website.

Did you know that before author and illustrator Beatrix Potter began her career writing the famous children's classics, she was a scientist?

In her new picture book Beatrix Potter, Scientist (illustrated by Junyi Wu), Lindsay H. Metcalf reveals how as a child Beatrix Potter was curious about plants and animals, but devoted her life as a young adult to studying fungi.

Like the illustration of Beatrix on the cover, the book focuses a lens on her lesser-known years as a mycologist (one who studies fungi). Although Potter had no formal schooling in science, Beatrix Potter was introduced to mushrooms  by a talented amateur named Charles McIntosh. He became her mentor and sent her samples to study. Beatrix made beautiful detailed drawings of each specimen. She also figured out a way to prove that new mushrooms grow from spores, something that wasn't well known at the time. However, like other women scientists in the 1800s and early 1900s, Beatrix Potter encountered resistance when she tried to share her findings.

After finishing the book, educators and parents will likely want to discuss with young readers the pros and cons of how Beatrix ultimately dealt with the rejection.

The back matter is extensive, and includes a section that gives more detail about Beatrix Potter's life and studies, a timeline, a bibliography and suggestions for further reading. It is well worth perusing.

Overall Beatrix Potter, Scientist will appeal to both young readers interested in STEM and also those interested in women's history. Investigate a copy today!

Activity: Draw or Paint a Fungus

What better way to celebrate Beatrix Potter's work than to make a detailed drawing of a mushroom.

First, look at some of Beatrix Potter's illustrations online (for example, here).

You will need some art supplies, such as:

Find a mushroom to draw.

Safety note:  A few fungi are poisonous, so avoid handling wild ones.

Fungi obtain nutrients by decomposing plants, particularly living or dead woody plants, so you will often discover them in forests.

The mushroom that we see is called a fruiting body. The fruiting body is like the flowers of a plant because it is how how a fungus makes more of itself or reproduces. The rest of the fungus is made up of threadlike strands called hyphae which form a mat called the mycelium. The mycelium is often hidden within the tree or soil and may grow for years unseen.

When conditions are right, a fungus produces its fruiting bodies. They often prefer cool, moist conditions and fall is a great time to find them. 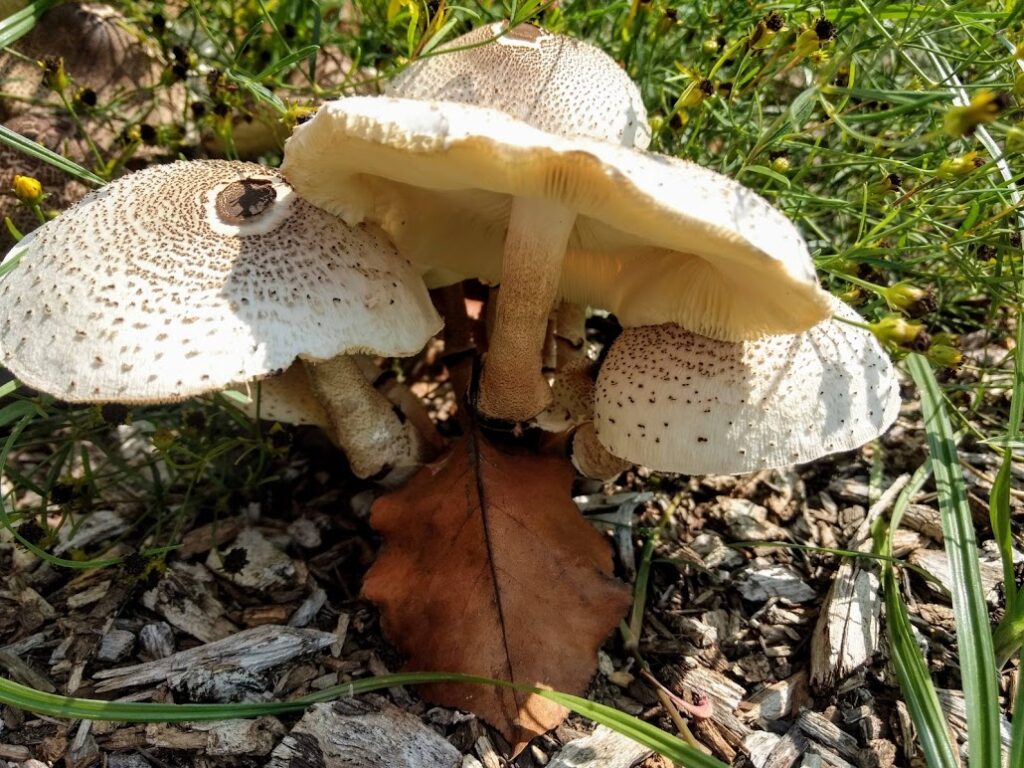 Some fruiting bodies have a stipe (scientific term for the stalk part). On the underside of the mushroom in the middle of the photograph you can see ridges. Those are called gills. 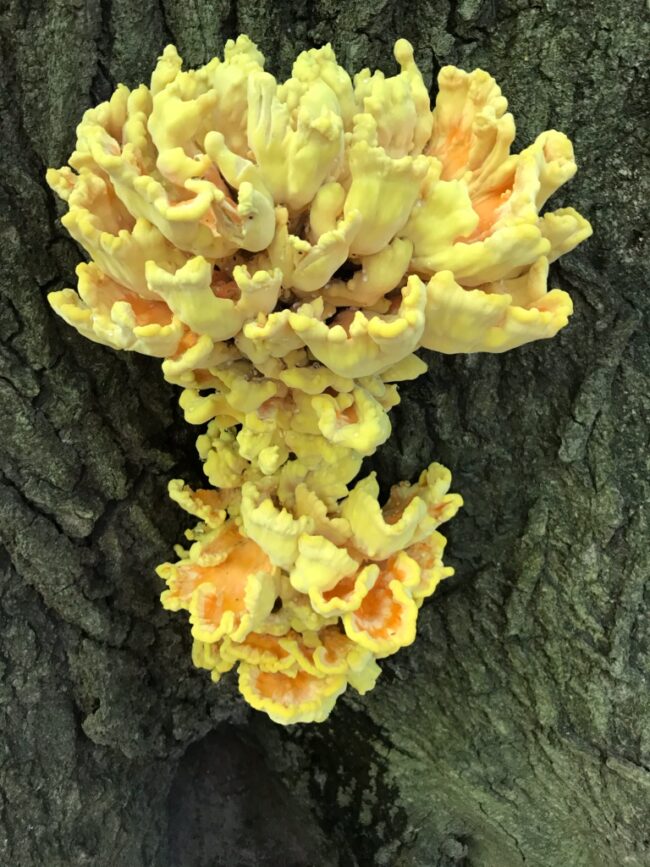 Others form shelves. Sometimes the shelves are soft. 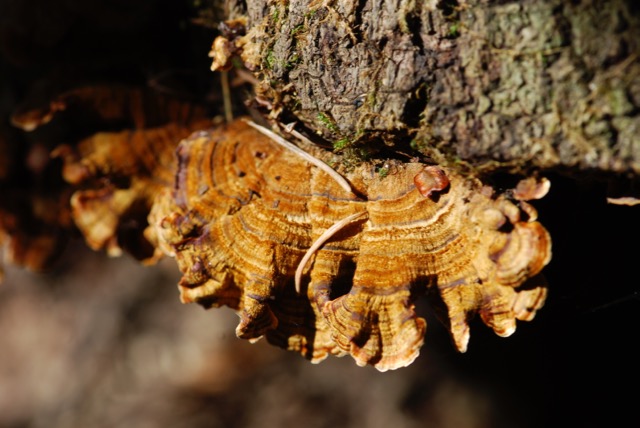 Sometimes the shelves are hard. These fruiting bodies may be called brackets or conks. They can be quite colorful.

If you have trouble finding a mushroom in nature, you may want to examine a cultivated mushroom from the grocery store instead.

Observe the mushroom closely and draw what you see.

You can find out more about fungi in these related posts:

Be sure to check out our ever-growing list of biographies of women scientists at Science Books for Kids. 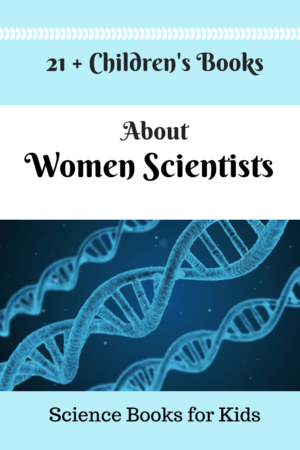 Disclosure: This book was provided electronically by the author. Also, I am an affiliate with Amazon so I can provide you with cover images and links to more information about books and products. As you probably are aware, if you click through the highlighted title link and purchase a product, I will receive a very small commission, at no extra cost to you. Any proceeds help defray the costs of hosting and maintaining this website.