For those of you who have doing the cat science projects, try adding coffee to the smells experiment. I accidentally dropped a few coffee beans of the floor yesterday and my cat went wild for them. See how your cat reacts to coffee and tea and let me know. By the way, chocolate can make dogs and cats very sick, so avoid letting your animals eat any.

Quick, what is a Cavia porcellus?

If you know it is a guinea pig or cavy (another word for guinea pig), then you probably already have one of these sweet little creatures. Today we are going to look at a few science activities you can do to learn more about guinea pigs.

Classification
Guinea pigs are small rodents originally from the grasslands along the west coast of South America. Well, at least scientists originally thought they were rodents. Some studies of DNA sequences published in the journal Nature during the 1990’s seem to indicate that cavies aren’t rodents. The debate lingers on. If you are interested in genetics, this might be a science topic for you to tackle in the future. (If you need to brush up on what a rodent is, check links in the “Science with Your Pet Mice” post.)

There are some other South American animals that are relatives of domesticated guinea pigs. One is a small brown animal named Cavia aperea. Others are the so-called yellow-toothed cavy, Galea musteloides, and the Muenster yellow-toothed cavy, Galea monasteriensis, which wasn’t discovered until the late 1990’s. More distant relatives are the Patagonian cavy and even the capybara. There are a lot of interesting rodents in South America. See if you can find pictures of them.

Nutrition
Back from when I was a student, I still remember another graduate student complaining that during his thesis defense exam one of the professors asked him "What other mammal besides humans lack the ability to make its own vitamin C?" The student didn’t know the answer, but I did. One of the first things you need to know to keep guinea pigs as pets is that they need vitamin C added to their diet because they can’t make it themselves. You need to use foods that are specially made for guinea pigs, and add fresh vegetables to their diet that are high in vitamin C. Some examples are kale, parsley, and limes.

Guinea pig breeders also recommend feeding guinea pigs hay. Hay is dried grass. As well as being an aid for their digestion, it also helps keep their teeth in good shape. It makes sense they would like grass, since they are originally from grasslands. 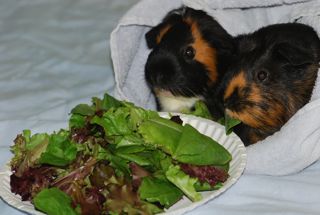 Once you’ve covered the nutritional basics, you might want to give the guinea pigs some food choice tests to see if they have any preferences. One of our guinea pigs seems to love grapes, where the other one could care less. The grape-loving guinea pig runs away from tomatoes, though. See previous pet science posts for ideas about setting up a choice test to determine what foods your guinea pig loves best. Just remember to always supply lots of pellets and hay so they never get hungry.

Growing Wheat Grass
Gardening for your pet is always fun. Here are some instructions for growing a mini-garden indoors, which your guinea pig is sure to enjoy. (You should check this one just for the pictures). Cats like grass too. If you choose to use soil, make absolutely sure it is organic. Some soils may contain pesticides, which could harm your piggie.

If you find that you like doing this, grow some sprouts or wheatgrass for yourself to eat, too.

Housing
In nature guinea pigs live in burrows, so they like to have a house to retreat to. A fun project is to design and build a house and see how the pigs like it. You can use cardboard boxes and tubes, or if you have access to woodworking equipment, try wood. Just be sure to use materials that are non-toxic.

Our piggies let us know they thought one of the cardboard houses we provided was too small. They played “flip that house” with it.

I talked about how cats use sounds to communicate last week. It turns out that guinea pigs make an interesting assortment of sounds as well. If you have a guinea pig, listen and record the sounds it makes. Some of the sounds might be described as coos, squeaks, and teeth chatters. Oh yes, and the loud “wheek, wheek, wheek” whenever the refrigerator door opens.

If you don’t have guinea pigs, hear some at Jackie’s Guinea Pigs.

Behavior
Because guinea pigs tend to be timid and run and hide when startled, some people have dismissed their intelligence and disregarded the notion that you might be able to train them. It turns out that guinea pigs are quite intelligent and engaging. With gentleness and patience, you can teach a guinea pig a few tricks.

(Video has music and a pop-up ad.)

Although getting your guinea pigs to do tricks like that looks like a lot of fun, it also takes time and patience. You might want to start out with behavioral enrichment. What’s that? It is simply providing an interesting and safe environment for your guineas so they don’t get bored. Most guinea pig guides now suggest that you get them out of their cage for at least an hour per day. Provide a safe place for them to exercise and explore. Provide toys such as mirrors, balls and bells. A small box full of shredded paper with a hole in one side will provide them something to explore. Just be sure your guinea pigs seem relaxed and interested. If they seem restless or scared, try to provide something for them to hide under until they feel safe, or return them to their cage and try again later.

By the way, be alert to the fact that guinea pigs often won’t urinate or defecate while away from their box. If your guinea pig seems uncomfortable and has been outside for a while, put him back inside his cage for a little while. Yes, some guinea pigs can be housebroken. 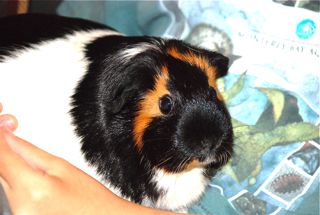 And speaking of needing to go, I seem to have wandered on here more than I intended. If you have any further questions, feel free to leave a comment.

For an introduction to guinea pigs for younger children, you might want to try:

by Dick King-Smith and Anita Jeram (Illustrator) Dick King-Smith has some wonderful fiction books told from the point-of-view of animals. In this case, he has written a nonfiction book that is an introduction to owning and caring for guinea pigs. Note: This book does address the issue of death of a pet.

The Proper Care of Guinea Pigs

by Peter Gurney
Peter Gurney is a beloved advocate of guinea pigs, who was well known in the community of pet owners.

by Gerry Bucsis and Barbara Somerville contains information for taking care of guinea pigs as well as suggestions for activities.

Gordon's Guide to Caring for Your Guinea Pigs (Pets' Guides)

by Isabel Thomas is illustrated both with color photographs and with humorous illustrations of Gordon the guinea pig, who narrates the book. It covers the basics of guinea pig care clearly and concisely. Everyone who is thinking of adopting a guinea pig would do well to read this book first.

Have you ever wondered what your cat was saying when it makes various sounds? Let's take a look at cats communicating and then do some simple activities to learn more.

If you don't have cats (or even if you do), listen to the cats in the video below and decide what you think they are saying.

The first gray cat is making a cat-to-human vocalization, that is he or she is trying to communicate to a human. He is definitely asking to go out. There may be a door there to the right side.

The second cat is looking out the window at birds. Cats often make that sound when hunting, usually when the prey is out of reach. Some people have suggested that the cats are trying to call the birds in, which would be a cat-to-bird vocalization. Birds are curious when it comes to unusual sounds, as most birders know. Birders often make soft “pishing” noises to entice a bird to come closer. As for the cat's "cheh cheh" sounds, I have wondered whether the sound is to alert other cats in the area to potential prey. Cats are solitary hunters, but you never know.

The cats in the second video are more difficult to interpret. They are communicating to one another, so it is a cat-to-cat vocalization. But what are they saying? Maybe one wants to stay up and play, while the other wants to take a nap?

By the way, a scientist recently recorded cat sounds under various conditions and then asked volunteers to interpret the sounds. (There wasn’t a video to add visual cues). It turns out people who owned cats correctly figured out what the sounds meant about 40% of the time, and people who didn’t own cats didn’t have much luck. It isn't as easy as you would think to figure out what cats are saying.

Individual cats vary considerably in the sounds they make, based both on their genetics (breed) and learning environment. One of our cats had a sound we called “yhine,” a whining meow made while he was yawning. Cats can also make sounds we can’t hear, called ultrasonic sounds. When a cat opens its mouth, but doesn’t make a sound, it may be producing an ultrasonic call.

Ask your children what sounds they think a cat makes. Have them discuss and try to imitate cat sounds like meows, murps, purrs and yowls. Carry on conversations using only cat sounds.

Spend some time listening to your cat. You might want to record or videotape your cat(s) communicating throughout the day. Relate which sounds your cat makes with activities or locations, to see if there are any patterns. For example, does he always make one sound in the kitchen? Could he be asking for food? Does she make another sound when she sees a bird outside the window?

For older children interested in sound, take a look at this website of math and science activities with sound. Towards the bottom is a detailed look at the differences of infrasound and ultrasound.

Next week we will move on to some fun science activities with pet guinea pigs. And now my cat wants me to feed her...

If you’d like to learn more about cats, here are a few books with information (contains affiliate links to Amazon).

How to Talk to Your Cat

by Jean Craighead George and illustrated by Paul Meisel (2003)

How to Speak Cat: A Guide to Decoding Cat Language