This morning it was a bit difficult to find a bug for bug of the week. Can you guess why from this picture? 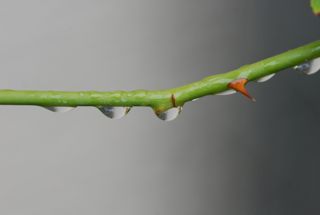 Woo, woo, it is raining here. Rain is a novel event, and all the insects apparently have sought shelter. I knew where to look, however, to find an insect that would be still out. There is always something happening on the desert milkweed, and this morning was no exception. Here is our bug this week, captured quickly before it started to rain again. 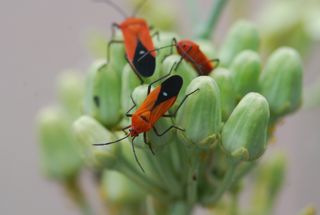 The bright red bug shown is commonly called a seed bug (Oncopeltus sanguiniolentus). It may resemble the boxelder bug found in other parts of the country, but it lacks the black bars on the red section (top) of its wings.This species has one white dot in the black part (bottom) of its wings. Another species that has the black bars in the red, but has two white dots in the black is the small milkweed bug, Lygaeus kalmii. (See photo in newer post). To paraphrase Dr. Seuss, "what a very lot of bugs there are!"

It is amazing that there are so many insects feeding on the desert milkweed. The sap of milkweeds contains both rubbery latex and poisons. Insects like queen and monarch caterpillars, yellow oleander aphids and these milkweed bugs have ways to deal with it. In this case the bugs avoid the latex-carrying channels with their straw-like mouthparts.

If there aren’t any milkweeds available, these versatile bugs also feed on the seeds of various plants.

My friend, the blogger over at the Musings, Mischief and Mayhem asked a question about fireflies. She wants to know why are there a lot of fireflies in northern Alabama right now (first part of August), but she isn’t seeing any in Tallahassee, Florida. Is it because it is a wet year? Is it because the city is spraying for mosquitoes?

Because I know that there are a lot of different species of fireflies (also known as lightning bugs), I first checked to see when adult fireflies have been sighted in the past in Tallahassee. A quick check revealed a website that tracks firefly sightings. According to the Florida listings, there is at least one group of fireflies around in late March to May, and another roughly late June through the first part of August. Adult fireflies live a few weeks to two months, and often feed on nectar from flowers.

Although the only report from Tallahassee suggests the fireflies were out earlier in the year, she potentially could see fireflies in Florida now. So, are they absent because it was a wet year? Knowing a little bit about fireflies, I would say the opposite. They should be more abundant in wetter years and in wetter locations. Why? Fireflies are not flies at all, but actually beetles. As such, they pass through egg, larva, pupa and adult stages. In the larval stage they are eating machines, just eating and growing. The larvae look sort of like elongate tanks, with movable plates on their backs and can glow just like the adults. What do they eat? Depending on the species, firefly larvae eat things like snails, slugs, earthworms and the larvae of other insects, such as cutworms. Most of those things thrive in wet years, so the fireflies should have more food and do better in wet years and wet areas. 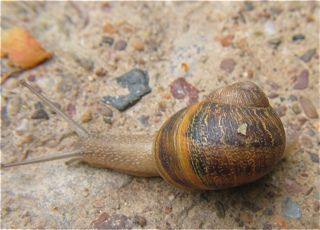 What about pesticides? To be honest, I don’t know enough because I don't know what pesticides are used there. The type of pesticide, how it is applied, and where and when it is applied will influence how many other insects will be killed. In general, a broad-spectrum pesticide sprayed for adult mosquitoes would probably kill a lot of non-target insects, including fireflies. In fact, the non-target insects are often more susceptible than the pests.

Another suggestion is that more people feel unsafe going out at night and stay inside, keeping their doors locked while they watch TV. If you aren’t out looking, you won’t notice if fireflies are active or not.

Without more information, I'm afraid I can't say for sure why there aren't any fireflies in Tallahassee right now. If you have any other ideas, please feel free to share them. If you have time, check when or if fireflies can be found in your area and let me know if you see any. In case you were wondering, even though it is pretty dry here, we do have firefly beetles in the desert. The weird thing is that they don’t glow or flash.

If you would like to encourage more fireflies in your area, you can provide food for them. Simply planting flowers to provide nectar can be a great first step. Many of our cultivated flowers are bred to look nice and may not supply nectar. Look for lists of nectar plants for butterfly gardens, as these will supply nectar for other insects too.

If you want to provide food for the larvae, think about having a compost heap. Earthworms, snails and slugs can all live in the periphery or cooler areas of a compost heap.

Fireflies also do better in forested areas, so plant and encourage trees in your community. Leaving a few dead trees and/or logs in the forest to rot provides homes and food to fireflies and related creatures.

If you turn off excess lights at night it will not only help the environment and save you money, it may help fireflies too.

Finally, this may be obvious, but let fireflies live. If your child puts them in a jar, enjoy them for only a moment and then let them go again. I hate to be a “humbug,” but handling any insect shortens its life through unintentional injury, through the potential spread of diseases when many insects are brought together in cramped containers, and through disruption in the normal behaviors of the insect. Also, discourage others from chasing and killing fireflies with whiffle bats or tennis rackets, often seen as a game.

One of the best ways to encourage fireflies is to learn more about them by reading books and websites. Here are a few:

For a more technical discussion of how fireflies defend themselves with chemicals, try Chapter 4 in Thomas Eisner's Book "For Love of Insects."

Not far from where I found the cellar spider last week, I found this caterpillar feeding on a small ironwood tree. Instead of being alarmed that a caterpillar was eating my plant, I was actually pretty excited. I was pretty sure it is the larval form of the Mexican yellow, a very pretty butterfly. If not, then it is a closely related species.

If you are interested, here is a link to the Butterflies of Southeastern Arizona page which shows what the caterpillar might turn into, the Mexican yellow, Eurema mexicanum.

And here is their picture of the larva stage. Do you think it is the same kind, too?

The caterpillar was over an inch long, probably nearly mature. The next day it was gone. Hopefully it crawled away to form a chrysalis in a protected place and I'll be showing you a photo in a few weeks.