After talking about relatives of insects a few weeks ago, I realized that maybe we needed to take a step back and define the words I was using, like phylum. These are common terms used in biology, but it isn't always easy to remember how they relate to each other. Let's take a look at how scientists put living things in groups.

The science of organizing living things into groups is called classification. The Swedish botanist Linnaeus first proposed a system for grouping and naming organisms in the 1750's. The system is hierarchical with the upper levels including those below it.

If you are older, you may have learned something in school like "King Philip Came Over From Greater Spain" to remember the hierarchy of groups. Recently scientists have added a higher level, the domain and removed the Kingdom Monera. Plants, fungi, animals and protists belong to the Domain Eucharya.

This video explains the domains:

The kingdoms contains many distinct groups called phyla. Each phylum is divided into a number of classes. The classes are further divided into orders, families, genera, and finally, species.

Here is the classification hierarchy of the honey bee:

Sometimes it can be difficult to visualize. If you are a visual person, try drawing some diagrams. Here's one for insects. 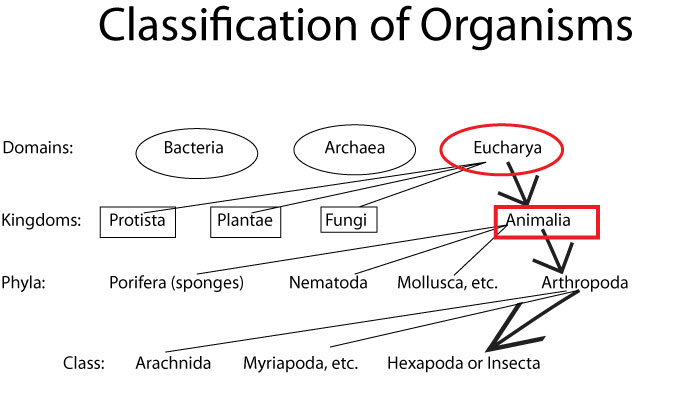 Up until recently, classification was mostly based on the physical characteristics of the organisms.

1. Sorting is an important precursor for classification for very young children.

For young children, sort by any feature you can think of.  You can sort by color, soft versus hard, shiny versus dull, by size. It's a great way to learn opposites, colors, shapes, and vocabulary words, too. Have fun!

Later graduate to sorting various toy animals by classes. Although is is best to use realistic models or stuffed animals, you can use pictures as well.

Start with the vertebrates, the  fish, birds, reptiles, amphibians and mammals.What characteristics do fish have? (fins, scales, gills). How is a reptile, such as a snake, different from an amphibian, like a frog or salamander? (Dry skin, scales). How is a bird (with feathers and a beak) different from a bat (mammal)?

Once your child masters that level, add insects, spiders and other animals without backbones. You may also sort by other characteristics, such as carnivore (meat eater), herbivore (plant eater) or decomposer (eats dead plants). Make a box labeled with each characteristic for the child to place the objects in or simply make heaps on the floor.

The guessing game “twenty questions” also can be modified to act like a classification key. Keys are used to identify living things and often utilize similar yes or no questions.

Have one person think of an object, preferably a living thing in this case. The point is for the others to ask yes or no questions, using narrowing the topic until someone can guess what the object is. The trick is that you are only allowed 20 questions.

3. Build your own classification scheme.

To explore ways to classify things, have your children build their own classification scheme using objects from around the house. Fill a bag beforehand with a mix of items similar to those suggested above. Ask the children to group the objects. What characteristics did they use? Would the balls and coins go together because they are both round, or did the coins go with the paper clips because they were metal? Name the groups, and then mix the items again to come up with another system.

One of the fun parts of classification is that there aren’t any right answers, just best guesses. Scientists rearrange the groups all the time as they gather more information.

4. Older children may want to investigate the use of DNA to group and identify living things. 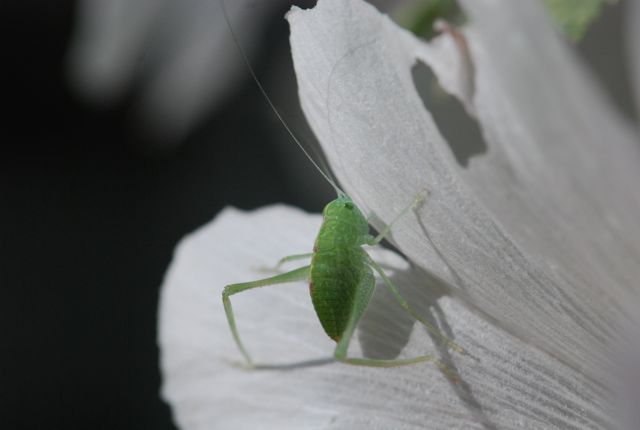 Spring is in the air. What a wonderful opportunity to get outside and go for a walk. Do you have a favorite trail or park to visit? What about the local nature center, arboretum or botanical garden? Take a few minutes from your hectic schedule and go on a stroll.

While you are outside, take a look around at the spring flowers. In some areas you may see the pussy willows just starting to bud and snowdrops peaking through melting snow. In other areas, the poppies may be starting to wane as the heat builds up. Wherever you may be, stop and enjoy the color and beauty of flowers.

You might be wondering what a nature hike has to do with science, even though it is certainly fun. It turns out you can do science while on a nature hike and it won't even be hard.

Take a closer look at the flowers you find. Notice if you can smell anything. Are the flowers all one color or are they a mix of colors within a single flower, like the darker orange patches in the yellow flower below? Are there any insects around? Observing is an important science skill, which is simple to do and can lead to further explorations. Do you find the plants in a certain place, such as out in the open or hidden under some brush? Do the plants change over the season? All of these observations can lead to further questions and even to experiments.

Do you know what kind of plants you are finding? Classifying is another important science skill, but it doesn't necessarily mean you have to learn the scientific name of everything you see. Classifying can simply mean grouping things based on similarities and differences. For example, you can group all the flowers you see based on the their color, leaf shape or size. Is the flower you are seeing now is the same as the one you just saw over there, or is it different? With children, start a conversation about how they would name the flowers. You can also ask how they would find out the name others have given the flowers.

When you get home, you might want to look up the common and/or scientific names of one or two of the flowers. There are many excellent books or you can use Internet sites like this one from Texas. In any case, hope you have an enjoyable weekend. 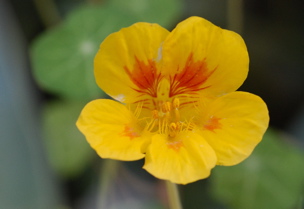