It is easy to find photographs of butterfly life cycles because butterflies are bright, colorful and active during the day. People like them.

Moths, on the other hand, are commonly drab, secretive and fly mostly at night, so not as much is available. 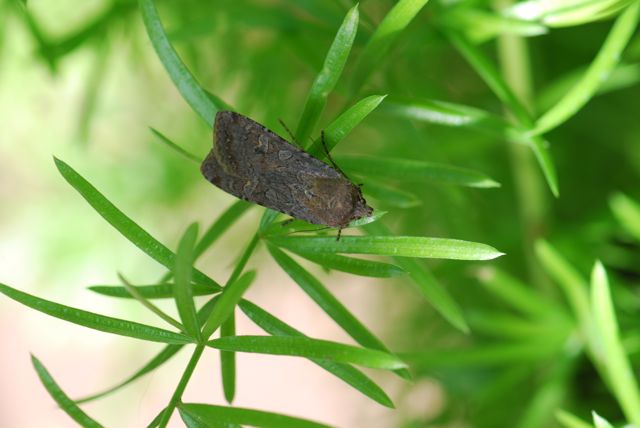 This is what the typical adult moth looks like. 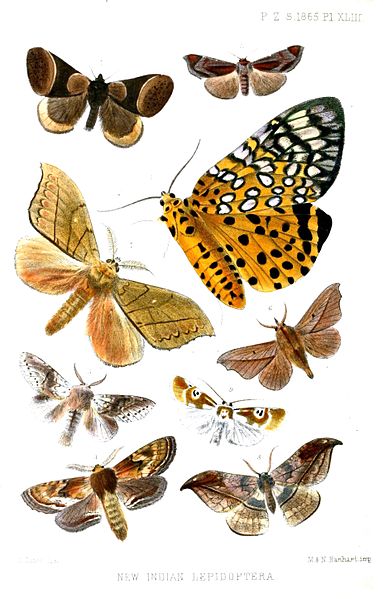 Some moths can be quite colorful, however, so color is not the only factor to consider. Another feature of moths is that their bodies are often thicker than that of butterflies, and the thorax area in particular may be covered with hair-like scales (illustration from Wikimedia). Therefore, moths look fuzzy. 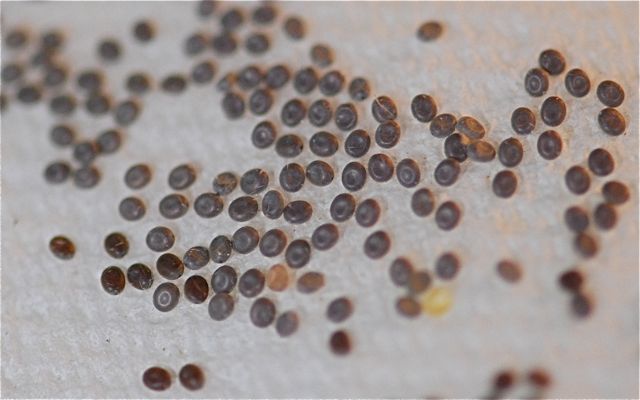 The adult moths lay eggs. The size and shape will depend on the species of moth. These are silkworm eggs. 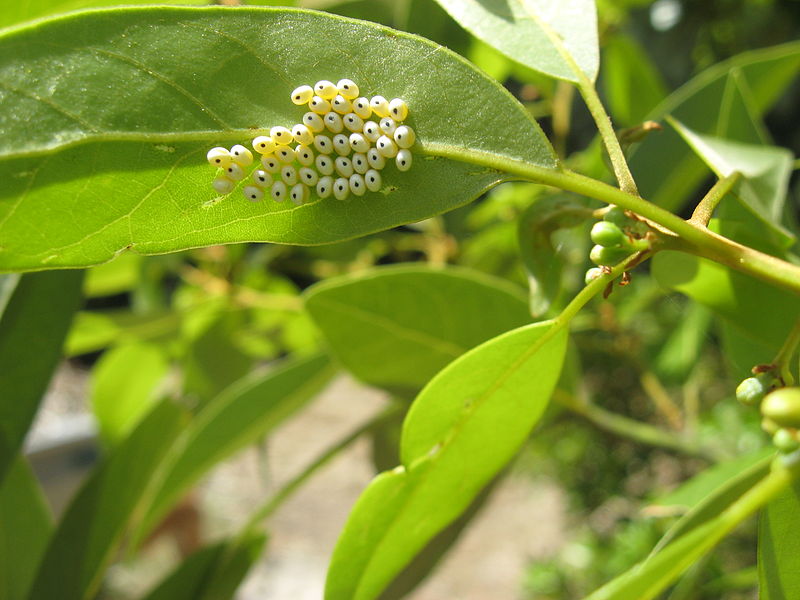 The yellow eggs on the leaf above were laid by an Io moth, Automeris io (Photograph by Gary Foster at Wikimedia). 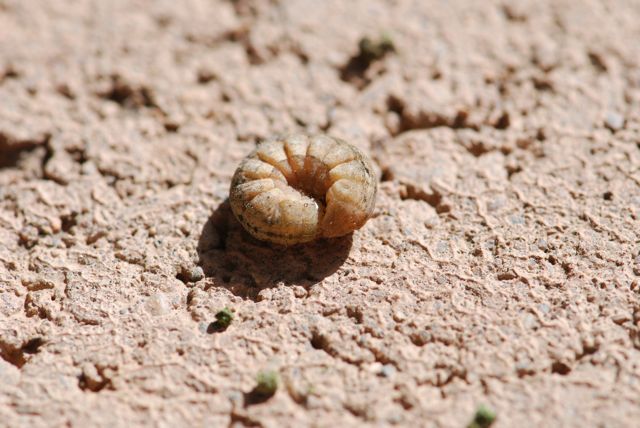 The caterpillar shown here is a type of cutworm. Moth larvae are essentially just like butterfly larvae. 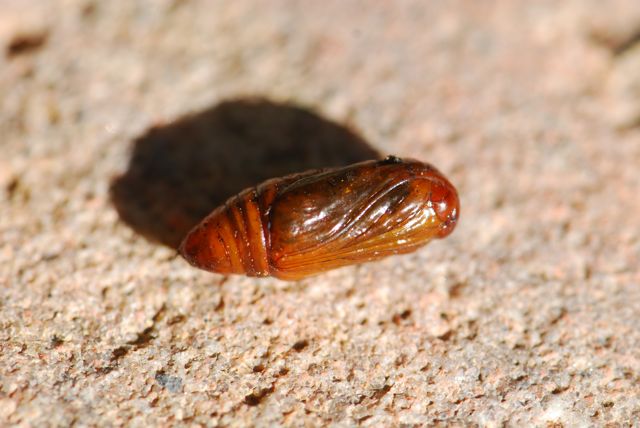 Moth pupae, however, are quite different from butterfly pupae. Often moth larvae construct a bag made of silk, called a cocoon, and then pupate inside it. The pupa itself is plain reddish-brown.

Other moth larvae excavate underground chambers and pupate in the soil.

Butterfly pupae, in contrast, are called chrysalids and sometimes form colorful and elaborate shapes. They are often found attached to plants.

For another view of a moth life cycle, try this post about silkworms.

Although moths are often ignored, they are on the order of ten times more numerous than butterflies. That means that for every butterfly you see flitting about your yard, there may be ten species of moths hidden away. Something to think about...

Did you wonder what kind of moth was in the cocoon in the “another lacewing larva” post? I did and so I kept an eye on it. This week a brown moth emerged. 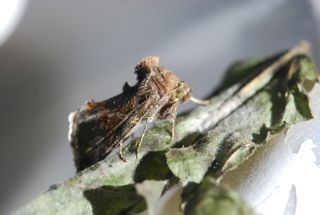 It is a cabbage looper moth, Trichoplusia ni. Check out the punk look. Isn't that wild? 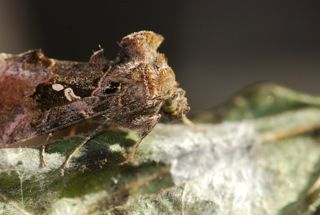 I didn't muss this moth up, those are naturally arranged scales. It also has some white markings on it's wing.

The cabbage looper pupa is pale green with some brown marks on the back and it is hidden under a shield of white silk.

The cabbage looper caterpillar was bug of the week in an earlier post. It is a pale green caterpillar that loops when it walks.

Moths are often ignored because they are small, drab and are most active at night. But as you can see, if you look at them close up, they can be quite fascinating.

If you are interested in finding out more about moths, try:

Discovering Moths: Nighttime Jewels in Your Own Backyard by John Himmelman

On the theme of remarkable discoveries from humble insect beginnings, let’s explore another insect that also changed human history, the silkworm.

Legend has it that humans and silkworms met one fine morning in the year 2640 B.C. A Chinese Empress named Hsi-Ling-Chi (various other spellings found) was strolling in her garden drinking tea when a white cocoon plopped into her cup from an overhead tree. 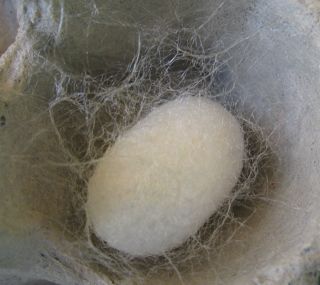 Instead of dumping it out and asking her servant for another cup of tea like any reasonable person would probably have done, she studied the cocoon. She stirred the warm tea with her finger and noticed a fine strand beginning to unravel from the fuzzy cocoon. Being a weaver, she thought of using the fiber to make cloth. She called to her servant and together they unwound the cocoon into a single long filament. Thus, the silk industry was born.

The cocoon that Hsi-Ling-Chi had collided with was that of the silkworm moth, Bombyx mori. The caterpillar feeds on leaves of mulberry trees of the genus Morus, hence the silkworm species name mori. 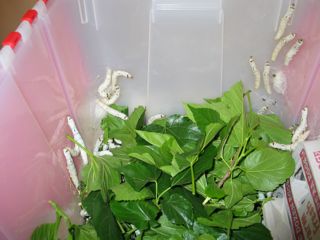 Here are some silkworm caterpillars getting ready to pupate: 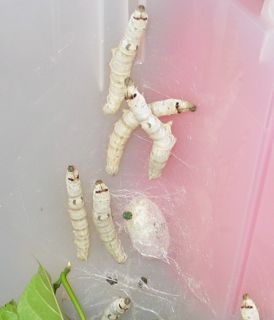 When it is ready to transform into an adult, the caterpillar uses its enormous silk-producing glands (the glands are up to 25% of the mature caterpillar’s weight!) to spin the oval cocoon.

Rather than being soft and pliable, as you would expect from something made of silk, the cocoon is actually rigid because the caterpillar adds a sticky, gummy protein called sericin to the thread. The sericin hardens into a stiff protective coating, giving the whole thing a consistency resembling Styrofoam. Inside the cocoon, the caterpillar transforms into a pupa, and then into a buff-colored moth.

How does a moth, which does not have chewing jaws like the caterpillar, escape the hardened cocoon? Amazingly, the moth discharges a special enzyme that dissolves both the silk and the sericin in one end of the cocoon, allowing the moth to escape through a circular opening.

With her swirling tea bath, Hsi-Ling-Chi had discovered the process to free the silk from the sericin by immersion in hot water. If the moth is allowed to emerge from the cocoon naturally, the enzyme cuts through all the strands, making too many short pieces to spin easily. In the silk industry the cocoons are boiled with the pupa still inside to obtain one long strand of silk, exactly as the caterpillar laid it down. Strands from several cocoons are then spun together to make a strong thread, and woven into cloth.

The resulting silk cloth was like nothing that had been available before. It was lightweight and relatively smooth, and pleasing to the touch. The Emperor soon realized the potential of silk as a commodity and rushed into large-scale production. The Chinese began to share their product with the world, which was eager to buy it.

Although they were willing to sell the silk cloth, the Chinese carefully kept the source shrouded in mystery for well over 1000 years. The penalty for disclosing the source of silk was death. By keeping silkworms a secret, the Chinese developed one of the greatest trade monopolies ever. Wealthy Europeans and Middle Easterners wanted the silk, and the so-called Silk Road between China and Europe opened up more trade between the continents. Other products and ideas began to be exchanged as well. This exchange of goods allowed certain groups to accumulate wealth and shifted power and culture throughout the world.

Speculation about the source of silk was wild. One group thought the Chinese were harvesting silk from a new variety of animal called a sea-sheep. Others thought it came from various plants. As late as the Roman Empire, Pliny the Elder who wrote his Natural History around 70 AD, thought the source of silk was a tree. Eventually Japan, India and then the Byzantines discovered the real secret of silk and started their own silk production or sericulture programs. The Byzantines were able to undercut the Chinese after some Nestorian monks smuggled silkworm cocoons out of China in their canes. But China remained the most important source for many centuries. Eventually the Turks cut off the overland route to Asia. European exploration for alternative routes to obtain both silk and spices lead Columbus to the New World.

Early Europeans coming to the New World carried silkworms with them. The English had long wanted to develop a silkworm industry, but their climate was not suitable. The king thought that starting silkworm farms in the colonies could be a good solution and forced farmers to plant groves of mulberry trees. However, the silkworms turned out to be fussy and never did well. Farmers quickly turned to more profitable cotton and tobacco as crops.

Not only did the silkworm change our history, but we changed the silkworm too. Silkworms are now truly domesticated creatures. There are no Bombyx mori moths left in the wild. Over thousands of years of selection by humans, the caterpillars have lost all urge to crawl and sit placidly waiting for food to be dumped onto them. The moths are heavy-bodied with shortened wings, and they can do no more than flap their wings and make short hops. When we raised ours, we found that if a male moth managed to flutter out of its container, it sat there (I thought it looked embarrassed) until a person comes along to retrieve it. Silkworms now depend on humans completely for their survival. Some strains have been bred that can develop on artificial diets made of ground up dried mulberry leaves and vitamins.

Along with the changes in the people and the moths, came changes with the trees they feed on. Because the silkworm consumes leaves of the mulberry tree, particularly the white or Chinese mulberry Morus alba, the trees were spread throughout the world with the silkworms. In the United States we also have a native American or red mulberry, Morus rubra, and the black mulberry, Morus nigra, first sent over from Europe during the colonial period. White mulberries of the variety Morus multicaulis were developed for silkworm cultivation and have been distributed widely during attempts to establish a silkworm industry here. In addition to being food for silkworms, the trees produce small clustered fruit that can be used to make jams, pies and fruit spreads. 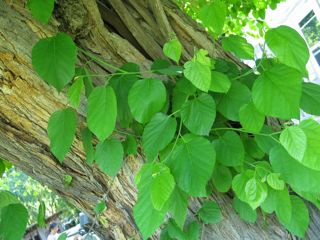 Eventually synthetic fibers were discovered that have largely replaced silk. Nonetheless, it is still a popular fabric. It takes dyes beautifully, is warm in winter, cool in summer and drapes marvelously. Today silk is still cultivated in Japan, China, Spain France, Italy and Columbia. Lady Di’s wedding dress was made of silk from Britain’s last remaining active silkworm farm. Throughout the last 4000 years wearing silk has been a status symbol of the wealthy, and the desire for it has changed history.

For more information on rearing silkworms, a step-by step look at growing silkworms can be found in the Bombyx mori on-line Journal.

by Sylvia A. Johnson

by Ron Fridell, and Patricia Walsh

The Story of Silk: From Worm Spit to Woven Scarves (Traveling Photographer)

Children's Fiction
The Empress and the Silkworm

by Linda Sue Park is a fiction chapter book about two children who decide to raise silkworms for a state fair project. Although the story about silkworms is already compelling, the main character and the author also have chats on the side throughout the book that reveal how the process of writing works.

Shrinking the Cat: Genetic Engineering Before We Knew About Genes

by Sue Hubell. Houghton Mifflin Company, New York. 2001. Despite the title, she also has packed in a great deal of information about silkworms.

Science Books for Kids also has a growing list of children's books about moths and butterflies.