Our fascinating seeds in a pod from last week's mystery were from a red bird of paradise, also called pride-of-Barbados (Caesalpinia pulcherrima). In Phoenix it is sometimes mistakenly called a Mexican bird of paradise, which is a different plant. 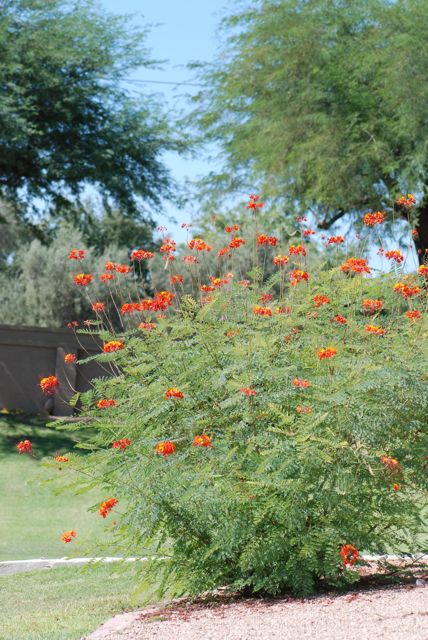 The red bird of paradise is a popular landscape plant in Phoenix. It grows to be a tall shrub during the summer, with lovely orange/red flowers. 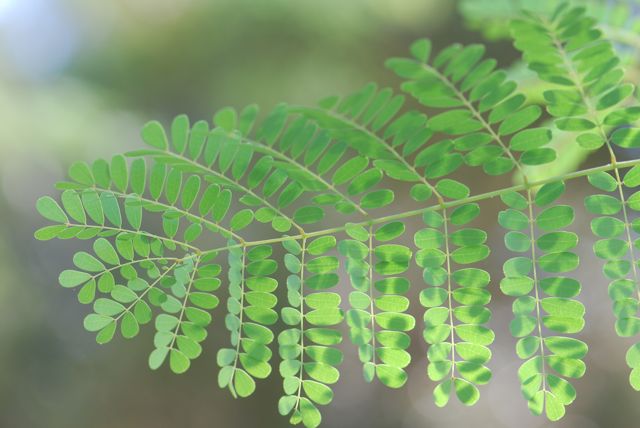 It has lacy compound leaves.

Originally from the tropics of South America and the West Indies, the red bird of paradise is frost sensitive and loses its leaves in the winter. Many people cut the plant nearly to the ground in the winter, but it grows back readily when the weather gets warm again. 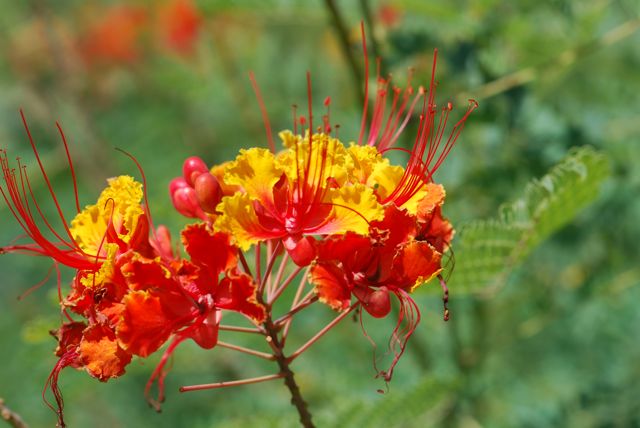 The floral structure is unusual, with very long stamens. 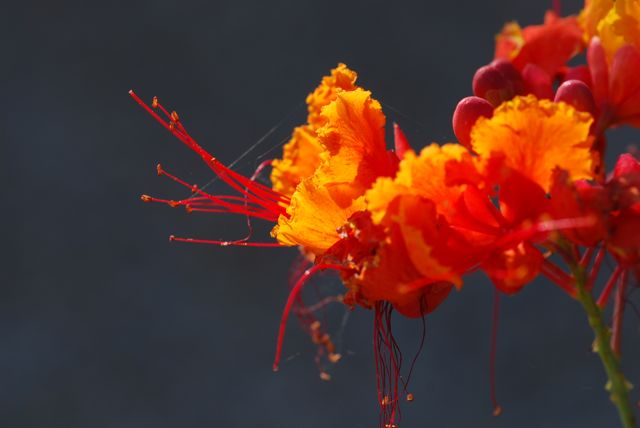 The stamens are the male parts of the flower that produce pollen.

The flowers are favorites of bees, wasps, hummingbirds and butterflies. The plants are thought to be pollinated by butterflies. 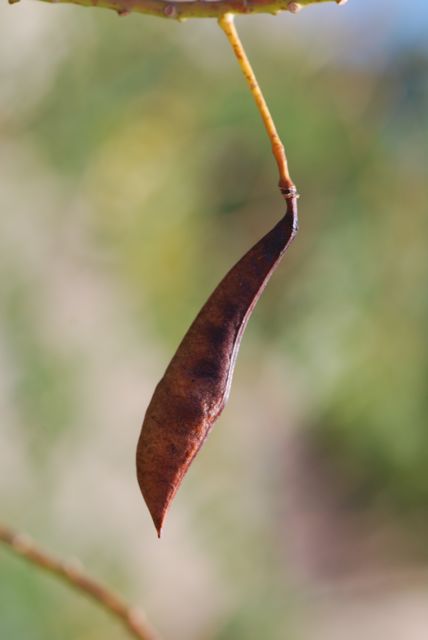 and these interesting ridged seeds. Note:  Some websites have indicated the pods and seeds may be poisonous.

You probably won't see the seeds in the pods once they mature. 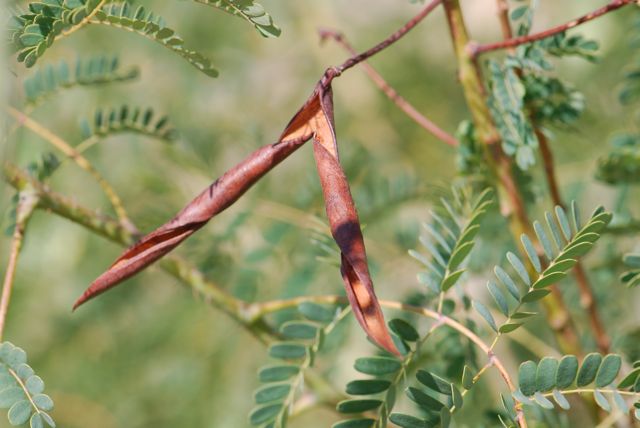 The dried pods burst open on the plant and shoot the seeds. Cool!

Red bird of paradise plants have a number of interesting features, including having nectaries outside the flower that produce nectar for visiting insects.

Have you ever seen a red bird of paradise?

A special thank you to Heather for suggesting this plant. 🙂

This week, instead of looking at just insects, we are going to take a close look at the flowers of an amazing plant.

This plant is commonly called “red bird of paradise” or “Pride of Barbados,” Caesalpinia pulcherrima. The flowers are a burst of vibrant color, almost like flames. As a photographer, I love the bizarre structures and shapes. As a scientist, I tend to start asking questions. While taking a few photographs, I became more and more curious about these remarkable flowers. 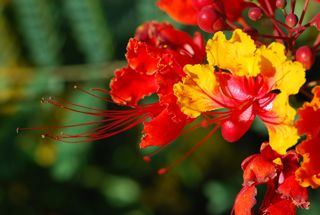 First I found honey bees and wasps walking over the buds in the upper center of the flower cluster, like they were gathering nectar. 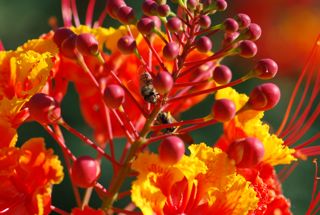 Sometimes plants have nectaries, the organs that produce the sweet fluid nectar, on places outside of the flower itself. I couldn’t find any text to support my idea, but I did find a photograph. After you click on this link, check the photograph carefully. Look for the whitish crystals at the bases of the interior buds. Looks to me like sweet nectar that has flowed from nectaries and then dried. By the way, nectaries found outside of the flower are called extrafloral nectaries by botanists.

Bees and wasps were also visiting the flowers, so apparently the flowers provide nectar too. (There are some plants with flowers that provide only pollen).

Next I found small bees and flies that were rubbing on the long, hair-like projections. 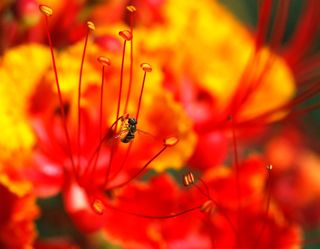 Those are the male parts of the flower, called the stamens. At the tip of each stamen (the stalk is called the filament) is the anther, which produces the pollen. Look at these flowers. To be pollinated, pollen must get from the anthers to the stigma, or female part of the flower. But first the pollinator must pick up the pollen. Just what kind of pollinator could pick up pollen from the long stalk-like stamens when its head was drinking nectar from the flower interior? The pollinator must be something fairly big by the looks.

Who are some possibilities? While watching I saw honey bees, carpenter bees, wasps, digger bees, flower flies and even a dragonfly lurking nearby. None of these seemed big enough. 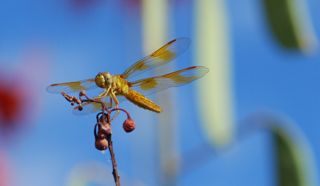 The dragonfly was probably catching some of the small flies that were visiting the flowers for nectar.

Doing some research, I found that red bird of paradise flowers are pollinated by two different groups of animals. Scientists have shown that the red bird of paradise is pollinated by large butterflies, at least in some areas. Remember the pipevine swallowtail I showed last week?  Many of the swallowtails flutter their wings while feeding on nectar at flowers. The butterflies get the pollen on their wings while they are feeding by brushing up against the stamens, then pass off the pollen to the female part or stigma at the next flower they visit.

In addition to butterflies, hummingbirds also visit and pollinate this plant.

Next time you are in the tropics or other places where one of these astonishing plants grows, take a look at the incredible complexity of these unbelievable flowers.

One my favorite books about flowers for children is The Reason for a Flower by Ruth Heller. The illustrations are wonderful. The text is extremely detailed, even though it is in rhyme. How does she get all that information packed into so few words? Be aware there are two places where inaccuracies creep in. On one page she shows the male parts as an anther on a stamen as parallel to a the female parts of stigma on a style. Technically the entire male structure is called a stamen, so it probably should be "from an anther on a filament." Towards the end she also calls a mushroom a plant, which is a very outdated classification scheme. Fungi are now in their own separate kingdom. Look past these technical slips and the book is overall still a gem.