Ever noticed odors that are surprisingly intense under certain circumstances? Last night while the kids were swimming in the pool, my friend and I noticed two surprising odors. The first reeked, but lasted only briefly. The kids got out of the pool, and walked around looking for the source, but it went away before they found anything. Then about half an hour later we noticed a sickeningly sweet fragrance. I began to wonder why we might have smelled the odors so strongly. Can you think of any reasons? Let’s explore some ideas in the activity below.

About the Sense of Smell
We humans tend to see the world through our eyes and ears. We often neglect the sense of smell, unless it serves a particular purpose. Have you ever smelled something cooking and realized it was done, simply by its aroma? What other circumstances do you use your sense of smell? Perhaps to detect when someone or something needs changing?

Many animals communicate to one another via smells and other chemical signals. Everything from mammals such as dogs and mice, to social insects such as ants and bees, rely on odors to locate food, make trails, mark territory, and to identify kin.

Some animals use smells to warn other animals away. After learning that the porcupine at the zoo was named “Stinkerbell” (for obvious reasons), I discovered that porcupines have a strong odor scientists believe may warn other animals to stay away from their sharp quills. The odors come from chemicals on the quills themselves.

(Borrowed this photo from Free Stock Photos for websites - FreeDigitalPhotos.net)

I don't think it was a porcupine we smelled last night. It smelled more like this: 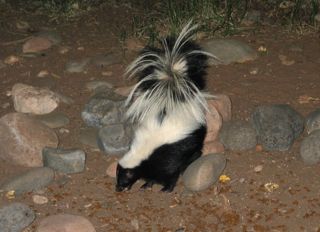 It’s a odor-filled world out there just waiting to be explored.

Sense of Smell Activity
Did you think of any reasons why we were more sensitive to odors at the pool? Here are three ideas:

1.    It was nearly dark and we weren’t able to use our vision as much. Do you think other senses become sharper when one sense is lessened?
2.    The wind tends to go down at sunset. It was calm and still, so odors didn’t get blown away as fast.
3.    The humidity was up around the pool and also because the sun was going down. Perhaps humidity effects our sense of smell.

How would we test the ideas?

Number the containers, not the lids. Ask a helper to prepare the odor examples by placing a cotton ball in a container and then adding a few drops of the odor to be tested. Have the helper write down the key as to which odors correspond to which numbers, but don’t let anyone else know. Keep the containers cool and covered between uses. The cotton balls make it harder to tell one substance from another if someone peeks.

Ask your helper to re-number the containers randomly, still keeping track of which smells are in each vial.  Ask the first subject (A) to try again with a blindfold, B to sniff the containers in a normal area, and C to go to the humid area or breathe over a bowl of warm water.

Finally, randomize the numbers again and ask A to go to the humid area, B to wear the blindfold and C to go to the normal area. Now check their guesses for accuracy.

What happened? Was it easier to guess the odors under any of the test conditions?

Did all the guesses get worse with time? That may happen because we may get used a smell or habituate to it, which means we don’t really perceive it as clearly. If you allowed enough time between tests, it might be less likely to occur.

We didn’t test for wind. Can you think of a way to test whether or sense of smell is changed by wind moving the odors around?

As an activity for younger children, allow them to explore the odors of various spices. When my son was 3 or 4 we made an alphabet of herbs and spices by gluing a small patch of spice to a poster-sized paper for each letter of the alphabet. Surprisingly, we were able cover most of the alphabet.

If you want to learn more, try:

The Sense of Smell by Ellen Weiss