What would you do if you found one of these bright red creatures in your yard? 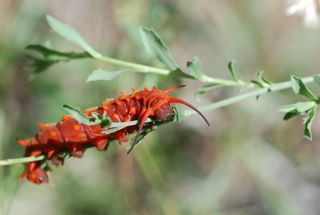 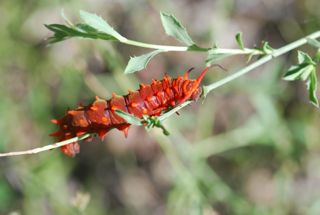 You should cheer because they are the caterpillars of the beautiful pipevine swallowtail butterfly (Battus philenor). We found these at the Boyce Thompson Arboretum in Arizona.

The bright red caterpillars will turn into one of these butterflies. 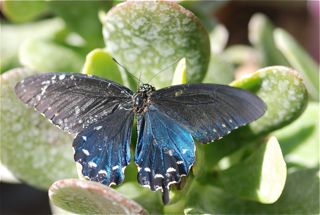 Check out the gorgeous metallic blue on the lower parts.

I should admit right away that it is extremely difficult to get a good photograph of a pipevine swallowtail butterfly. The butterflies have a behavior known as “flutter feeding” which mean their wings are in almost constant motion. This one was on the floor in a public place, so I suspect it may have been stepped on. Too bad.

The caterpillars of the pipevine swallowtail feed on plants called pipevines (Aristolochia species), hence the name. The plant is a small, drab vine and is hard to spot. I am grateful to my friend who pointed out this one. Edit: My friend says this plant is Aristolochia watsonii. 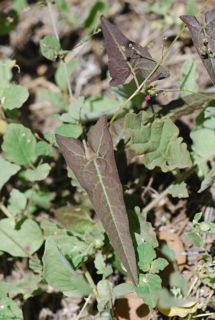 The plants contain a nasty chemical called aristolochoic acid that deters most animals from feeding on them. The ability to feed on pipevine plants is a unique feature of these caterpillars.

The caterpillars change size and color as they grow. You may also see pipevine caterpillars that look like the ones above, but are black instead of red.  The larger, older caterpillars are often found resting on plants besides their hosts (the ones they feed on). The caterpillar above is not on a pipevine.

On the same day we also saw this little butterfly. 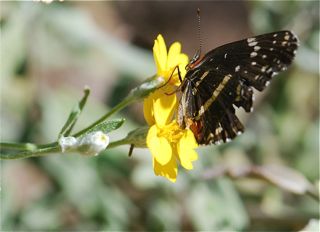 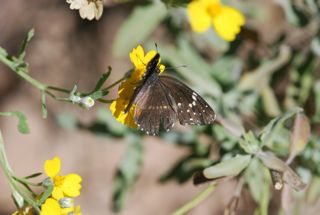 This is the adult of the bordered patch (Chlosyne lacinia). In some books it might be called a lacinia checkerspot. This little guy is really quite battered.

The bordered patch species is also quite variable in color, like the caterpillars of the pipevine. The North American Butterfly Association has a page of photographs of members of this species. You will see this dark color version towards the bottom. How did anyone ever figure out they were all the same species?

I was not surprised to learn the bordered patch caterpillars feed on sunflowers (as well as ragweed). Here is the garden that was only a few feet away from where I found the butterfly. If you want to raise butterflies, just plant a few of these. 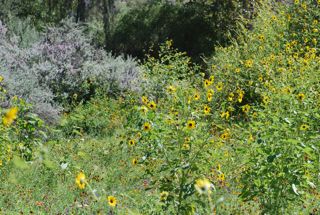