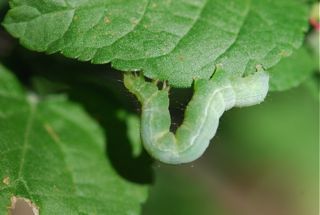 The looper gets its name from the fact it “loops up” in the middle while walking. The caterpillar has two sets of appendages. Its six true legs are right behind the head. Towards the rear is another set of fleshy, wider appendages called “prolegs.” Scientists don't count the prolegs, so the caterpillar still has the six legs characteristic of insects. 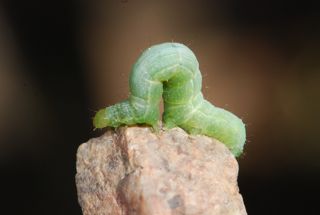 This one was nibbling my mint, but I'm not too concerned. The mint is prolific and the caterpillar has a lot of enemies. It is eaten by birds, wasps and parasitic flies. So, loop on little buddy.

Edit: The cabbage looper moth is featured in a later post.

6 thoughts on “Bug of the Week: Cabbage Looper”