Can you find the insect in these photos? 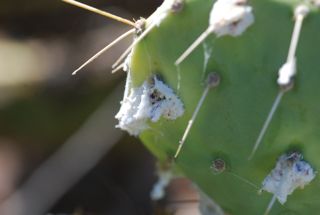 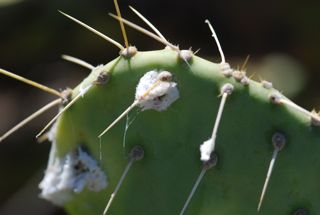 If you guess the white fuzzy, waxy stuff might be a clue, then congratulations. Believe it or not, the insect we are going to explore today has been the subject of greed, subterfuge and may have helped our forefathers defeat the British during the Revolutionary War. Not quite what you’d expect from a tiny insect that spends its life feeding on cactus pads hidden under some white fluff.

When the Spanish explorers first came to the New World they discovered the natives were wearing bright red garments. They were amazed, because no color like that could be found in Europe. The Mixtec people had been culturing a tiny insect, called the cochineal scale, as a way to produce a wondrous dye.

The cochineal scale insects live on the pads of certain prickly pear cacti. I’m not even sure how the early Mixtecs discovered the red body of the scale, because all you see on the surface is white fluff. Underneath is a small blob that looks like a pinkish seed. Within the body, the hemolymph is deep red. Although I doubt you can see it, there are few drops of this red where a bird or something has pulled the scale from out of the waxy covering in the left, center of the photographs. (Someday I hope to get some better photos, but this was at a public garden and I didn't want to disturb nature. As usual, The Firefly Forest has a good photo if you want to see another example.) Somehow the Mixtecs found the cochineal scale, however, and they figured out how to process them into a red dye.

The Mixtecs farmed the insects with skill and care. They would plant cactus pads infested with the scales, weed the plants, build walls to keep animals away from the plants, and even shelter the plants during rain showers so the insects wouldn’t get washed away. Then they would carefully collect and dry the female scales to make the dye powder. It was a hugely labor intensive process. Not to mention that the cactus pads were covered with painful spines, which had to be avoided.

Many people in Europe wanted the dye and there was a limited supply. At first, only the very rich and powerful could wear it, like kings and queens, or the bishops and cardinals of the Roman Catholic Church. By the year 1600 cochineal dye was an extremely valuable export from Southern Mexico. Gold was the only export from the region worth more money. Dried insect bodies were worth more than silver!

The Spanish went to great lengths to keep the origin of the dye a secret. In fact, the results of their subterfuge can still be found on the Internet today. You can find websites that mention the “cochineal beetle.” In the past, people thought the secret insect might be a beetle and this misidentification has survived until today. See this webpage, for example. Scale insects are flat, legless and have sucking mouthparts. Beetles are rounded, have hard wings called elytra, prominent legs and chewing mouthparts. Cochineals are scales for sure. Oops. And by the way, the insects make the red coloring within their own bodies, they do not obtain it from the red fruit.

Eventually the dye was used to color the “redcoats” of the British army during the Revolutionary War. I have read that our soldiers were able to recognize and selectively fire upon the high-ranking soldiers, because only the elite got to wear the bright red cochineal-dyed uniforms. The foot soldiers uniforms were dyed with a cheaper dye that gave a duller color. Thus, the officers were easy to spot.

In the 1870’s, synthetic red dyes were developed and they began to replace cochineal for widespread use. Cochineal in the United States is now largely used as a food dye, found in such products as sausages, candies, and juices, as well as cosmetics. Check some of the ingredients of pink fruit drinks at your local grocery and look for the word "cochineal." You may have been appreciating these wonderful insects when you drank juice and you didn’t even know it.

3 thoughts on “Bug of the Week: Cochineal Scale”