Week before last we must have had a spike in humidity levels because all the Texas sage bushes in the neighborhood started flowering. They were so pretty, I thought I'd add a plant of the week this week. 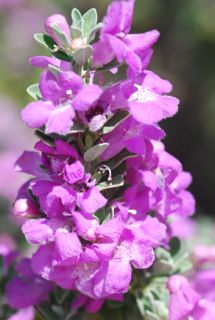 Also called purple sage, or Texas silverleaf, the scientific name of this Texas native plant is Leucophyllum frutescens.  They appear gray because their leaves are densely covered with silvery hairs. The flowers may be white, pink, lavender, purple, or blue, depending on the variety. Texas sages characteristically bloom after a rain, or at least a local rise in humidity levels. This interesting trait gives them the common name of “Texas barometer bush.” 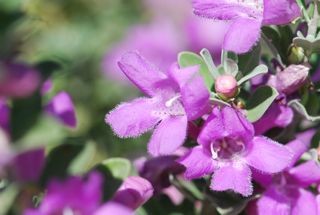 Check out the white and contrasting spots in the throat of the flower.

Texas sage and other related species are widely planted as water-conserving ornamentals in the southwestern United States. They can get quite big if watered occasionally and allowed to spread to their natural form. 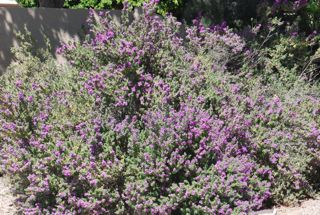 It isn’t uncommon to see them pruned as well. Pruning does cut down on the number of flowers, which are at the stem tips. 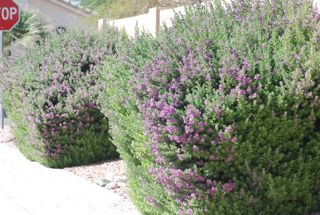 If you are interested in butterfly gardening, you might want to consider planting some of these shrubs. It turns out that they are also hosts for caterpillars, (although I’ve never seen any on ours.) Further south in Arizona there have been reports of caterpillars of the Theona Checkerspot (Chlosyne theona) using the sage as a food plant.

Caterpillars of an attention-grabbing moth called the Calleta silkmoth (Eupackardia calleta) also feed on Texas sage.  If you live in an area where they are found, you should look for them. Check the map at the Butterflies and Moths of North America website linked to the name of the moth.

3 thoughts on “Plant of the Week: Texas Sage”