One question that has come up (pun intended) from previous posts in this blog is why do pumpkins and apples float? To answer this question, we first need to look at why things float in general.

Do you still have your bin of water? Let’s try floating a few more things.

People have been wondering why things float since olden times. According to legends the ancient Greek, Archimedes, conducted experiments to test why things float or sink. Supposedly he figured it all out while sitting in the bathtub. Our modern interpretation is called Archimedes’ Principle.  It states that a body floating in a fluid is supported (or buoyed up) by a force equal to the weight of the fluid it displaces.

Let’s choose water as our fluid. Do you know how much a cubic centimeter of water weighs? How about a gallon?

A cubic centimeter of water weighs 1 gram by definition. A gallon of water (at a given temperature of 4 degrees C) weighs 8.34 pounds. So, in order to float, an item that weighs 1 gram must displace more than a cubic centimeter of water. An item that weighs 8.34 pounds must displace more than a gallon of water to float.

To test this, obtain a piece of modeling clay. Shape it into roughly a cubic centimeter. See if it will float. It will probably look something like this:

(Clay at the bottom).

Now, flatten out the same piece of clay and make a boat shape. A flat bottom with a lip around the edge works well. Place it onto the surface of the water. It should displace a lot more water this time and float. Although the weight of the clay didn’t change, the amount of water displaced did change. 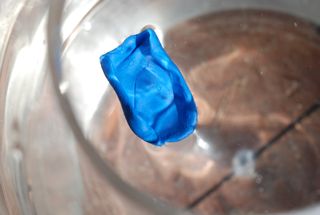 Have you tried floating a can of diet soda versus a can of regular soda? Both are the same size and shape, will they both act the same when placed in water?

Why don’t the two identical objects act the same way? According to the box at the bottom of this How Stuff Works page, diet soda has less sweeteners added, so it actually weighs slightly less for the same volume than regular soda. Because they are both mostly water, that slight change is enough to allow diet soda to float. Cool!

Apples and pumpkins are not solid. The pumpkin has a large hollow inside. Both weigh less than the amount of water they displace, and thus they float.

Try floating pumpkin seeds. What about apple seeds? Do they float?

We found that pumpkin seeds floated, but apple seeds did not. The pumpkin seeds are flat and displace an amount of water roughly equal to their size. On the other hand, apple seeds are compact and round. They displace little water. They don’t have to be very heavy to sink.

A few years ago, our family participated in a contest to build a working boat out of cardboard. We started by investigating various boat designs and materials by floating models in a tub. We learned a lot about sinking and floating. You might want to make some paper boats and try them yourself.

Another cool design for a paper boat that works well.

Edit: check out this video of a huge pumpkin made into a boat.