A friend called this week to report they had 24 inches of snow in 12 hours in Colorado. With that much snow, it’s time to do some snow science!

Snow science? Why would anyone study something as common as snow? I know that sometimes adults view it as a major headache. But snow has some important functions, and it turns out scientists from a number of different fields are interested in snow. Physicists, water scientists, meteorologists and even food scientists study aspects of snow.

Physics of Snow
The FAQ’s pages at the Snow Crystals website is a perfect place to start if you want to study the physics of snow. The author discusses how studying the growth and form of snow crystals can be applied to the field of crystals in general, and may have important engineering and technology applications.

A few weeks ago, we mentioned snow in the post on growing crystals. We suggested collecting some snow and examining it under a hand lens or magnifying glass.You might see something like this: 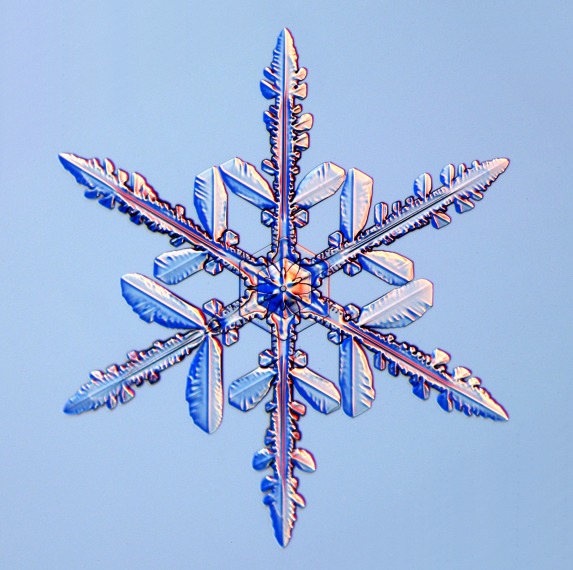 If you are interested in more incredible photographs of snow crystals, check out the three photo galleries at Snow Crystals.

The Snow Crystals website also has a number of science-related activities with snow and ice, including this discussion of ice spikes that form on ice cubes in the freezer. This is another great example of something you may have seen, but not really registered that it might be something worth taking another look at.

Another experiment you can try is to study the effect of light and heat absorption on snow melt. On a calm sunny day with snow on the ground, lay a square of aluminum foil on the snow in the sun. Then lay equal-sized squares of white cloth, and black cloth nearby. Leave them in the sun for at least an hour. Come back and look for any changes in the snow around and under the squares. Place a thermometer under each square and record the temperature. Are there any differences? What would you predict would happen?

How much water is in snow? A common figure is that 10 inches of snow equals one inch of precipitation, that is, one inch of water. Different types of snow, however, often yield different amounts of water. To test this, loosely pack snow to fill a measuring cup. Bring the snow indoors and let it melt. Now record how much water you obtained. Try this experiment several times, with snow of different consistencies. Does the same amount of snow always result in the same amount of water?

For more information about water storage in ice and snow, and how that effects the water cycle, visit the USGS water cycle page.

Food Scientists
Okay, now why would a food scientist be interested in snow? Because snow contains certain bacteria, which produce a protein that may be used in the future to prevent ice cream from getting freezer burn. Who knew?

We haven't tried this, but it looked interesting:
Sand, Snow and Solid Physical Science Wonder Kit

Have a great weekend, and enjoy the snow if you have some.