Carrying along the theme of insects that have changed the course of human history, let’s look at another species with humble beginnings and a big role. Here is a celebrity that can be found in the fallen, rotting grapefruit in my backyard. 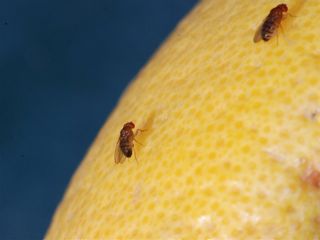 This photograph is of a male fruit fly, Drosophila melanogaster. Notice the bright red eyes. I can tell the one in the middle is a male because the end of the abdomen is dark. You might recognize these little flies if you have ever taken a genetics class or left a banana out on the counter too long. 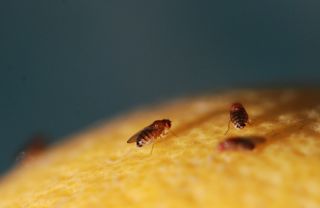 These are female fruit flies. Their abdomen lack the black block at the end.

Also called vinegar flies or pomace flies, these tiny creatures don’t actually feed on fruit, but their larvae feed on the fungi associated with decay. A sound, healthy fruit is of no interest to a fruit fly.

As for their benefit to humans, fruit flies have been the staples of biology labs for over a century. Much of what we know about genetics and developmental biology came from studies of fruit flies.

Drosophila melanogaster was not native to North America, but is now almost a domesticated species. It is found wherever people are found. In the western United States we have a few native species, including another fruit fly used in biology labs called Drosophilia pseudoobscura.

If you are interested in learning more about fruit flies, try the quirky adult nonfiction
book Fly: The Unsung Hero of Twentieth Century Science by Martin Brookes (Be aware that this book contains what would be considered adult themes.)

For kids, you might try a cute fiction picture book about flies, called
Diary of a Fly by Doreen Cronin, Harry Bliss (Illustrator). My son got to meet the author and illustrator of this book at a local indie bookstore, and they were a wonderful team. The illustrator had a big impact on my son, who loves to draw.