After a few posts about science in the garden, have you wondered whether any scientists have made discoveries using gardens or garden plants? The answer is that a whole “field’ of science (sorry ☺) was discovered in a garden and it is still progressing due to work on garden plants.

You’ve probably heard that the science of genetics was born in a monastery garden in the 1860’s. Gregor Mendel was a monk who carefully worked out genetic inheritance by growing garden pea plants. He work was ignored for about 30 years, until a few other scientists came up with the same ideas and rediscovered the importance of Mendel’s experiments.

In an interesting parallel, a woman named Barbara McClintock was born about the same time as Mendel’s work was being rediscovered, in 1902. As a child, Barbara liked playing sports and spent a lot of time outdoors. By the time she was a teenager she discovered she liked learning new things and decided to go to college. At the time women were not always encouraged to go to college, but she was determined to go. She went to Cornell University without even having enrolled, and they let her in.

Barbara liked Cornell and studying science so much she stayed on as a graduate student, getting her PhD in botany. She studied the genetics of corn plants. She studied what the clumps of DNA called chromosomes looked like in corn plant cells, years before scientists discovered what DNA was and how it worked. She also went out to the field and planted the corn, so she knew each plant and where it came from. When she worked in the corn field she wore "knickers" she had specially made, at a time when most women only wore dresses. 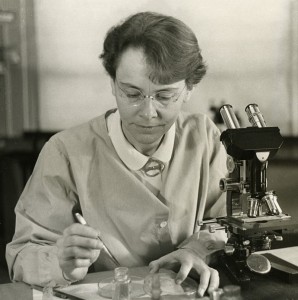 After graduating, eventually she got a job as an assistant professor at the University of Missouri. Her job only lasted a few years because she didn’t always follow the rules and did unusual things. Once when she realized she had forgotten her keys and found her work building was locked, she climbed up the front and crawled through a window. Assistant professors were not supposed to climb buildings.

Finally Barbara found a position at a research laboratory, Cold Spring Harbor Laboratory. There she spent many years growing corn and studying corn genetics. Soon she realized that the corn seeds were not coming out in the colors expected based on simple genetics. Interested in finding out why, Barbara worked hard and came up with an answer. The only problem was that the answer was that the genes were jumping from place to place. Because her answer was so different from what anyone expected, many other scientists didn’t understand or didn’t believe her. Her work was kind of like Mendel’s, ignored and forgotten by and large.

The good news is that Barbara persisted and finally people did begin to understand what she had discovered. In fact, scientists were so impressed with her work that in 1983 she was given the Noble Prize in Physiology and Medicine.

So you see, studying plants in a garden can lead to great things.

Books: (Covers and titles are affiliate links to Amazon)

Books for adults:
A Feeling for the Organism, 10th Aniversary Edition: The Life and Work of Barbara McClintock

I read this book as a graduate student and remember it had a large impact on me. Now I recently re-read it and see that it has some flaws, but is still interesting reading.

For another viewpoint, try: The Tangled Field: Barbara McClintock's Search for the Patterns of Genetic Control