This morning it has been partly cloudy, but during a burst of sunshine I was able to catch a photo of this paper wasp, Polistes flavus. 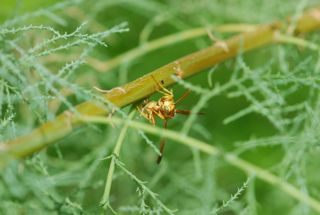 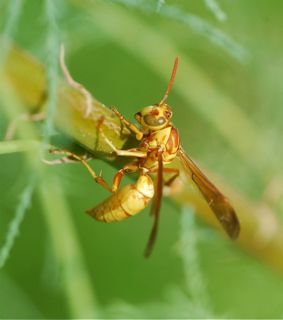 Look how shiny she is. Her eyes are shaped like kidney beans. She has three smaller eyes called ocellae in a triangle at the top of her head.

She was hunting for caterpillars and other insects. Wasps feed their young larvae bits of insects they catch and bring back to their extraordinary paper nests.

You might wonder whether I was in any danger taking this photo. In fact, this species of paper wasp that we encounter in Arizona is surprisingly unassuming. Unless you directly threaten their nest, they are not likely to sting. Their nests are often hidden in the dense foliage in small shrubs, such as rosemary bushes or under red yucca (hesperaloe) in our yard. We are much more likely to be stung by bees than these wasps.

I have noticed several paper wasps around my mint plants lately. I hope they are catching the cabbage loopers that have been devastating the plants. Go wasps, go.

2 thoughts on “Bug of the Week: Paper Wasp”