Having just put together a "chemistry day" event, I thought I'd provide some links and ideas for those of you who might want to do your own chemistry day, for those who missed our days and want to try some of the fun, or for those who want to extend the demonstrations/activities (see bottom of post).

Note: Be prepared for a mess (we did these outside). We supplied goggles, which we had purchased at a home supply store.

Ask the children if they predict the two objects will weigh the same (because they are the same size). If not, can they use the periodical table to figure out which will weigh more? Use the kitchen scale to test their prediction.

The Intermediate Physical Science Kit from Exploration Education has the materials for this activity, including supplies to make your own working balance.

A density column is made of liquids of different densities layered one over another. 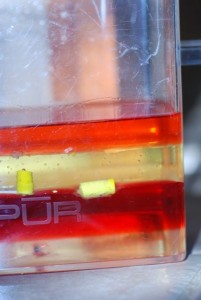 Ask the children to predict which liquid is the most dense and which is the least. Pour about an inch of corn syrup in the bottom of the container. Add a few drops of food coloring to the water. Hold the ladle with the bottom resting at the top of the corn syrup layer and slowly pour in an inch or so of water. Gently empty the ladle move it up and pour in the cooking oil. Again empty the ladle, move it to the top of the cooking oil layer and gently add a layer of rubbing alcohol. You may also want to add food coloring to the alcohol layer.

Once you have a column, then test how other materials float in the layers. The pennies should be the densest and fall to the bottom. We dropped in Mentos candies, which are made of sugar and glucose syrup, and found they were roughly the same density as corn syrup. The crayons are made of wax, and floated in the oil layer. Our toothpicks were the lightest of all and floated on the alcohol.

We designed our density column based on a video at the Happy Scientist website.
We also found examples at Steve Spangler Science:
Bubbling Density Concoction
and
Seven Layer Density Column

Science is Fun in the Lab of Shakhashiri has a Layered Liquids demonstration as well.

3. Elephant's toothpaste - recommended for outdoors where messy soapsuds won't be a problem.

Using a funnel, add 1/2 cup of peroxide and a 'squirt' of dish detergent to each water bottle. In another container, mix roughly two teaspoons of yeast with about 1/4 cup water for every two bottles hydrogen peroxide (doesn't need to be perfect). If you have a lot of children, you may need two or three containers of yeast/water. Shake or stir the yeast/water, and then pour a couple of tablespoons into each bottle containing the hydrogen peroxide/dish detergent mix. The concoction should erupt in a foamy volcano. Note: this is an exothermic reaction, which means the reaction gives off heat. Allow the children to explore the foam and some may notice the warmth.

The yeast in this reaction supplies the enzyme catalase. Oxygen is rapidly released causing the foamy bubbles in the soap.

Is it an acid or a base? 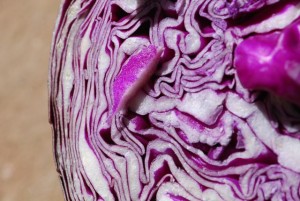 The first day we used the standard red cabbage indicator (red cabbage leaves ground in a blender with a bit of water) but the smell was unpleasant.

The next day we used frozen mixed berries ground in the blender with a bit of water. The mixed berries smelled better, although they didn't give quite as good a range of colors.

If you children are tired of the standard red cabbage indicator, try mixing a little tumeric (spice used in curries) and rubbing alcohol in a small container and then dip in strips of paper towel. Watch out, tumeric will stain like crazy! Allow the paper towel strips to dry on a newspaper. 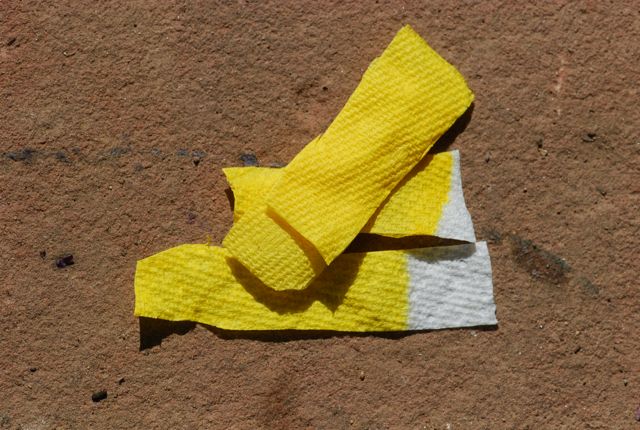 The tumeric solution makes a lovely yellow color. Once the strips are dry, test your acids and bases again.

We found the acids did not change the color of the strips, but bases made them turn a startling red. 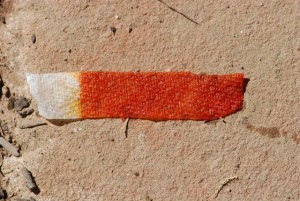 We also used the tumeric/alcohol to write messages on orangy-yellow paper and after they were dry, revealed the "secret message" by lightly spraying with a household cleaning product that contained ammonia.

and Food Science 101 (the chemistry behind a simple cake)

For those interested in learning the names of the elements and their symbols:

Chemistry is great fun. Hope this inspires you to do some hands-on chemistry, too.