Today's activities were inspired by the middle grade book Planet Hunter: Geoff Marcy and the Search for Other Earths by Vicki Oransky Wittenstein. For a review of the book, see Wrapped in Foil.

Dr. Geoffrey Marcy is an astronomer who hunts for planets around stars other than our sun. He and his team have found about half the planets discovered thus far.

According to the book, Dr. Marcy became interested in outer space when his parents gave him a telescope at 14. He climbed out the window to the patio roof with it. One look into the night sky, and he was hooked on astronomy.

Dr. Marcy pioneered a technique to look for planets that involves the use of a spectrometer, which gathers and measures light from stars. Let's celebrate the book by taking a look at some of the science behind his techniques.

One of the easiest ways to study how the light we see is made up of a mixture of colors (or light of different wavelengths), is to create a rainbow using water.

Robert Krampf has a video to show us how with a hose. (If you have never tried his Happy Scientist website, it is well worth a visit.)

Another device that can be used to separate light into its component colors is a prism. 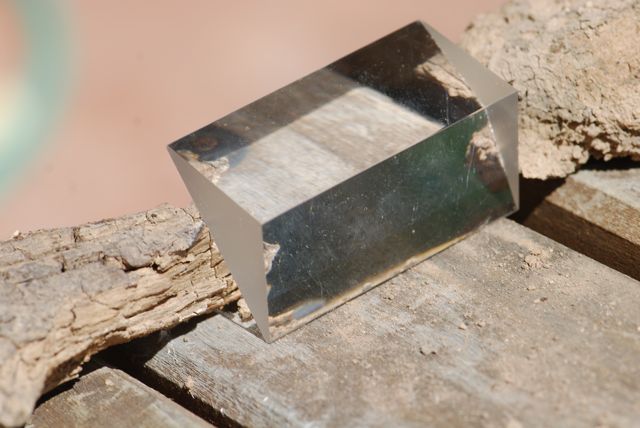 This prism is made of glass. You can find them at teaching or science supply stores. When the light passes through it, we can see this on the ground: 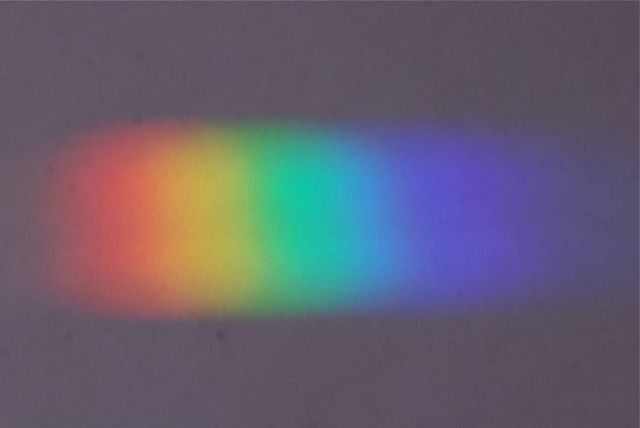 For best results I put a piece of white paper on the ground in a shaded area, and held the prism about three or four feet away in the direct sunlight. With practice you can find and direct the resulting rainbows by rotating the prism.

If you don't have a prism, the grooved side of a CD can separate colors in light as well. CD's act as what are called "diffraction grids."

2. Activity:  Make your own spectrometer from a cereal box. (Requires adult assistance)

What is a spectrometer? Is it different from a spectrophotometer?

A spectrometer is a device that gathers light from a source and divides it into a spectrum by passing it through a medium. Those used for astronomy would have a telescope to gather the light, some sort of device to separate the colors - such as a prism or diffraction grid - and a detector to record the results. Sometimes gases or solutions are added for the light to pass through to help gather additional information about the characteristics of the light.

There's a more detailed explanation at How Does a Spectrometer Work?

A spectrophotometer is simply a specialized spectrometer that works with light near or in the visible spectrum for humans.

To make a spectrometer using a cereal box,

Seal the top of empty cereal box with masking tape, so no light can enter. Lay the cereal box on one of its narrow sides. Ask an adult to cut a slit across the bottom of the box, about 1 inch down from the top side. Some of the instructions suggest reinforcing the slit with masking tape. Ours worked okay without doing that, but if your box tears, you will need to fix it.

Take a look at these websites for additional diagrams and information:

A fresh look at light: build your own spectrometer

Leaving the box on its side, turn it to the other end. Have an adult cut a diagonal slit at about an 60 degree angle from the top, towards the middle of the box. This groove will hold the CD at an angle. Then cut the CD in half with the scissors so it will slip into the groove. Be careful, the CD may shatter. Put 1/2 the CD in the groove, shiny (reflective) side up.

The last step is to cut a viewing window. With the CD in place, cut a square opening at the same end of the box so that you can look down onto the tilted CD to see the colors.

To test your spectrometer with a flashlight, take it into a room that can be made dark. Turn the flashlight on to shine into the light slit and then turn off the room lights. Look into the viewing hole. If you don't see a rainbow of colors, adjust the flashlight and or the angle of the box until one appears. You may now want to check the color spectrum of other light sources.

When Dr. Marcy and his team study the light from stars, they are looking for evidence that the star is wobbling due to the presence of a nearby planet. Evidence of wobble comes from shifts in color due to the Doppler Effect.

Here is a video that explains how the Doppler Effect works.

Next time you hear about a new planet being discovered some distant star, think of Dr. Marcy and his team. And if you know a child who is interested in science, particularly astronomy, then you should check out this inspiring book.