This week our activity is inspired by the middle-grade book Candy Bomber:  The Story of the Berlin Airlift's "Chocolate Pilot" by Michael O. Tunnell. For a full review of the book, visit Wrapped In Foil.

In Candy Bomber, pilot Gail Halvorsen releases small parachutes over the city of West Berlin after the end of World War II. The parachutes are carrying bundles of candy for the children whose lives have been disrupted by the aftermath of the war. Eventually the candy drops are turned into an official U.S. Air Force operation and more pilots join in. It is a heartwarming tale.

The challenge of building and testing parachutes would be a fun science activity to pair with this book.

A parachute consists of some sort of light material to form the canopy and suspension lines to attach the load. 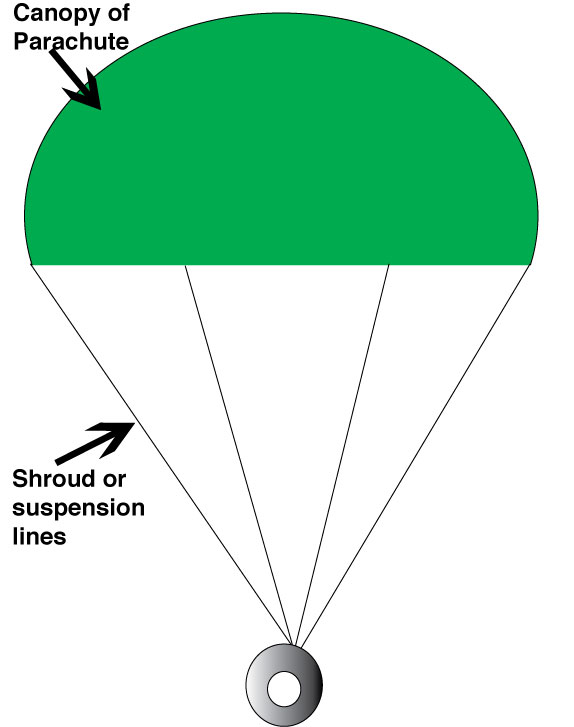 Some potential factors to measure:

You will need a launch site. We drop ours over the balcony from the second story of our house to the first floor. You might try playground equipment at a park or school that has a stable, raised platform. Keep safety in mind.

The simplest parachute to make is a square of material with strings tied to the four corners. Start with lines about 1 foot long. Tie the strings on the corners and bring the strings together at the bottom. Tie on a candy. A single hard candy with a hole in the center might be a good starting point, as long as your children are old enough.

Drop your parachute and measure one of the suggested factors. This is a great project to do with groups.

Here's a somewhat long video that shows you more details of how to make toy parachutes.

Let us know what you find out about parachutes.

Also, let us know what you think of the book.

3 thoughts on “The Candy Bomber: A Parachute Challenge for Kids”