Today we are going to do something a bit different. Let's take a look how you can use a history book as an inspiration for a science experiment.

The Great Molasses Flood by Deborah Kops is an account of an unusual disaster that hit Boston in 1919. It is written for middle grade readers.

On a quiet day in January 1919, a giant tank of molasses gave way and flooded a nearby neighborhood. People were injured or killed, and a few buildings were destroyed. At first everyone was concerned about rescue and cleanup, but very soon focus turned to how the disaster could have happened.

Some people suggested the reason the tank came apart could have been due to a bomb planted by anarchists. Others said it was simply a poorly-built tank that came apart at the seams. Still others thought the molasses might have been fermenting. Fermentation is a process that converts sugars into alcohol and carbon dioxide gas, often through the activity of yeasts (see note). Could lowly yeasts have had a role in this disaster?

Let's examine how fermenting molasses might have been involved in this mysterious event.

This activity takes at least one hour.

Label one of the bottles "control" and one "molasses." The control will contain all the same ingredients except molasses (You can reduce the number of controls if you are working with a large group). Add 1/3 cup warm water to each bottle with the funnel. Pour 2 Tablespoons of molasses into the bottle labeled "molasses" and swirl gently to mix. Wash and dry the funnel if you want to use it to add the yeast. Add 2 teaspoons of yeast per bottle to both bottles. Again swirl each bottle gently for a few seconds to mix the yeast into the water. Now cap each bottle with an uninflated balloon and set aside. 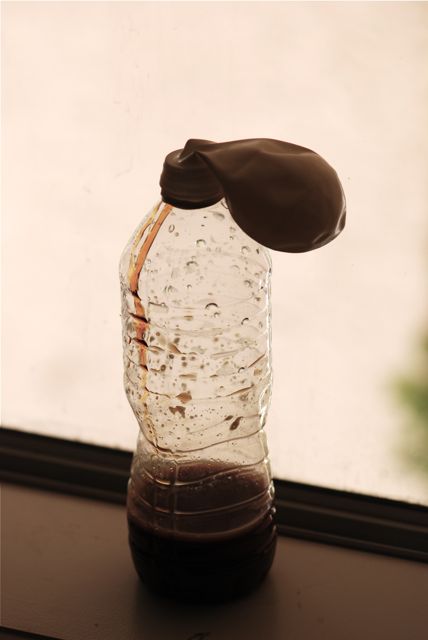 Check what is happening after 15 minutes and after a half hour, after 45 minutes, and after an hour.

What happens to the bottle that contains the fermenting molasses? How does that compare to the control? Measure each balloon at its widest part with the ruler and compare the results. 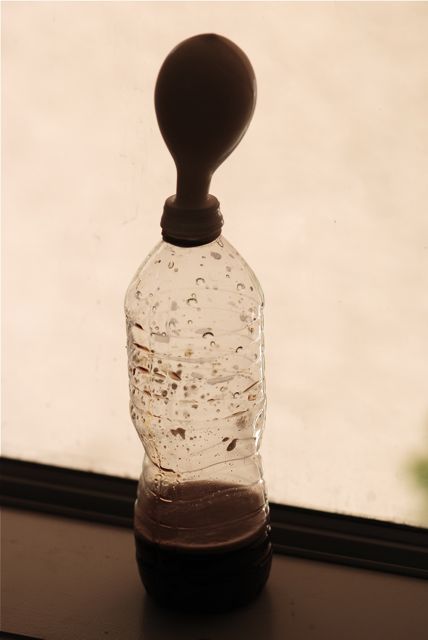 Encourage the children to draw their own conclusions. Could a large, possibly overloaded tank of molasses explode if the molasses began to ferment? What about the fact it was winter? Do you think temperature would be a factor? The author does say it was an unseasonably warm day. Can you think of a way to test if temperature is a factor?

(Note: The use of the plural yeasts in the upper paragraph refers to the fact that there are multiple species of yeasts involved. Typically the singular "yeast" is used to describe baking yeast. Hopefully that isn't too confusing.)

Read The Great Molasses Flood by Deborah Kops to find out more.

Book provided by the publisher for review purposes.

2 thoughts on “Weekend Science Fun: Learning About Science Through History”