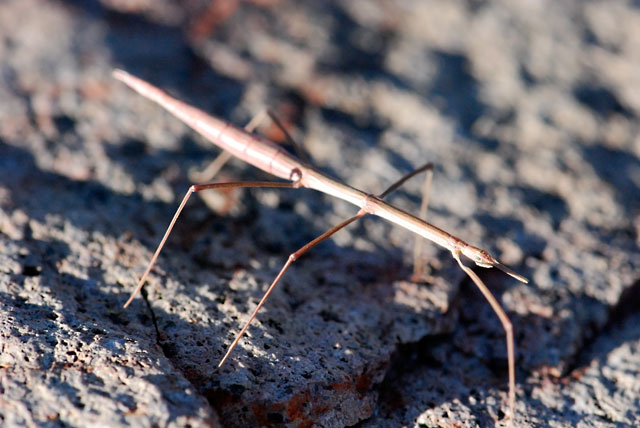 What might have thrown you off was the short antennae that stick straight out in front of the head. They could almost be mouthparts because they are so short compared to the antennae of most walkingsticks. (Well, that and the poor quality of the photograph :-)) 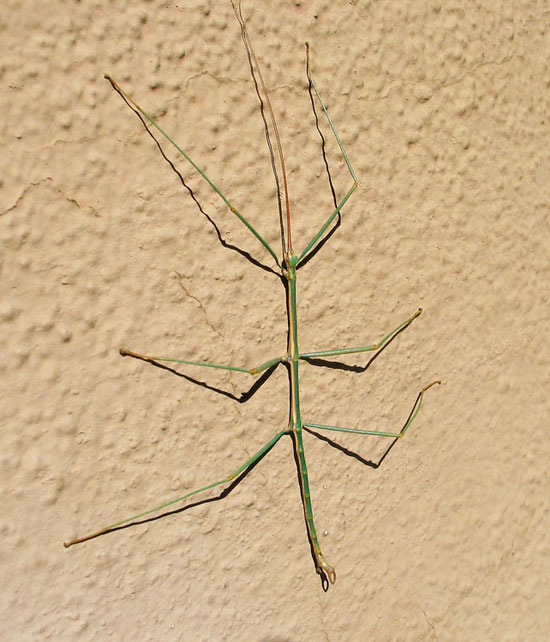 Most walkingsticks have long, thin antennae like this one. As you can see, they are also held pressed together and sticking straight out front when the insect is at rest.

Walkingsticks are common in Arizona. We have species that feed on acacia, mesquite trees and creosote bushes. They can be hard to spot when on their host plant, so you rarely see a walkingstick unless it has chosen to bask on a stucco wall like the one in the photograph.

Have you heard about the special relationship between ants and walkingsticks?

Walkingsticks are not the best parents. The females simply drop their eggs to the ground, where they would be susceptible to predators if it weren't for the ants. You would expect ants to eat the eggs wouldn't you? Turns out that instead there are structures on the walkingstick eggs that fool the ants into perceiving they are seeds. The ants pick up the eggs and take them to their nest, where the eggs remain unmolested until they hatch.

David Attenborough has an explanation in this video (Note: video has a pop-up ad):

The bottom line is that if we didn't have ants, we probably would have a lot fewer walkingsticks.

Have you seen a walkingstick? Where was it?