Did you see the lunar eclipse on April 15, 2014? Whenever I view a lunar eclipse, I remember the 12 men who visited the Moon during the late 1960s and early 1970s. Can you imagine what it must have been like to walk around on the surface of the Moon? 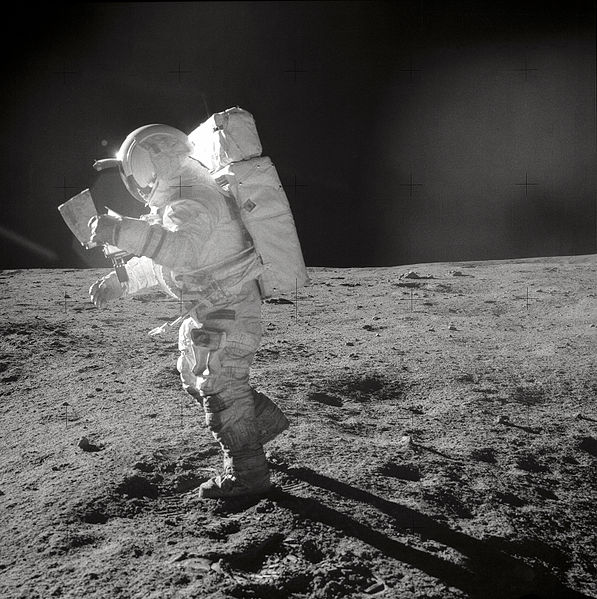 For one thing, it must have been difficult to navigate because there are so few landmarks compared to the Earth. Here is an astronaut reading a map. Do you know who he is? I'll give you a hint:  He would have flown on Apollo 14 in order for Alan Shepard to take the photograph.

The photograph is of Dr. Edgar Mitchell, who reveals what it is like to explore the Moon in his new book for older children, Earthrise: My Adventures as an Apollo 14 Astronaut

, written with Ellen Mahoney and with a foreword by Dr. Brian Cox.

Dr. Mitchell starts his narrative with his approach to the Moon in the spacecraft dubbed "Antares." Suddenly the on board computer signals for them to abort their mission. Have the astronauts come this far, only to be turned away?

He then goes back to describe his childhood, starting with his birth in Texas. He gives a quick overview of growing up on a ranch near Roswell, New Mexico. In many ways his childhood is typical:  raising steers in 4-H, playing musical instruments in the band, and camping under the stars with his family. More unusual are his experiences flying in a biplane at four years old and becoming a pilot at 16, possibly influenced by seeing the World War II planes at nearby Walker Air Force Base.

After going to college, getting married, and a stint in the Navy, Mitchell starts training as an astronaut. Most of the rest of the book is devoted to how he became an astronaut and his journey aboard Apollo 14. He includes many details that people might wonder about, such as how did the astronauts eat, sleep and go to the bathroom while in space. He also talks about the time he spent on the moon's surface and more briefly, the trip back to Earth. During the trip back, he reveals he had an experience which changed the focus of his life.

In addition to Dr. Mitchell's narration, the book has the fascinating sidebars filled with background information and clarifying details, a timeline of "Key Life Events," and several pages of suggested resources for further study in the back matter.

Certainly, some of the 12 Apollo astronauts who went to the moon have more name recognition than others. Earthrise goes a long way towards shining some well-deserved light onto someone who (dare I say it?) may have been eclipsed by others in the past. This may partially have been due to Dr. Mitchell's change of focus after leaving NASA, something he explains briefly, but does not dwell on.

Although obviously a must-have resource for future astronauts, Earthrise is also likely to appeal to those interested in history, science, engineering, and aviation. It is a revealing look at how one man's sense of adventure took him places that the rest of us can only imagine.

Dr. Mitchell mentions building model aircraft and hanging them from his ceiling when he was a child. 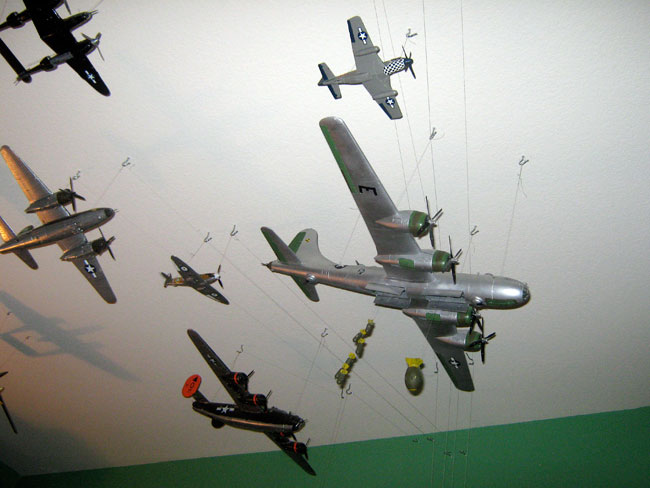 First,  build a model of an airplane out of paper, manila folder, or from a kit. You can find instructions for many paper models online, for example these card stock gliders. Hobby and craft stores often carry kits to assemble, as well.

Fishing line works well to hang the models, because it is durable and nearly invisible when hung, giving the best illusion that the plane is flying. You will also need a good ladder.

If you don't want to mar the ceiling, lightweight paper planes can be hung temporarily with painter's masking tape. This tape (often blue) is used for masking walls prior to painting and should remove easily.

For more permanent displays and for heavier models, you might want to consider installing hooks to anchor the lines. The planes in the photograph above are installed on hooks in such a way that they can be lowered for cleaning and then raised and repositioned without the need of a ladder.

Then it is only a matter of letting your imagination run free.

Earthrise: My Adventures as an Apollo 14 Astronaut

Disclosures: This book was provided for review by the publisher. Also, I am an affiliate for Amazon, and if you click through the linked titles or ads and make a purchase, I will receive a small commission at no extra charge to you. Proceeds will be used to maintain this self-hosted blog.

3 thoughts on “Earthrise: An Astronaut’s Story”