A teacher friend last week suggested he could show images from Bug of the Week to his class via a SmartBoard and ask students for insights into what they see (Great idea, Jeff!) 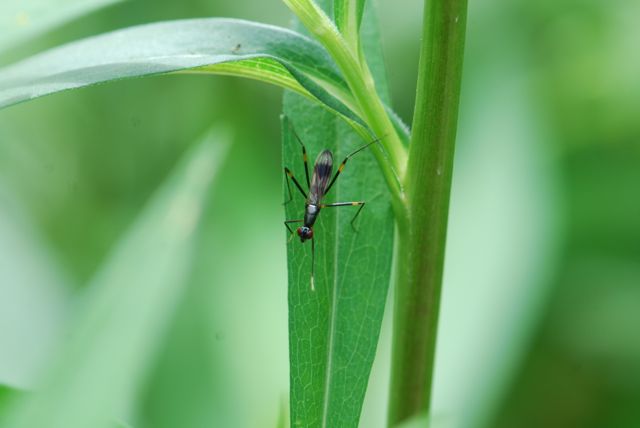 This insect (from the archives and from western New York state) would be perfect for that kind of student exploration.

First, you might want to ask what kind of insect it is. Is it a wasp? An ant? Or a fly? 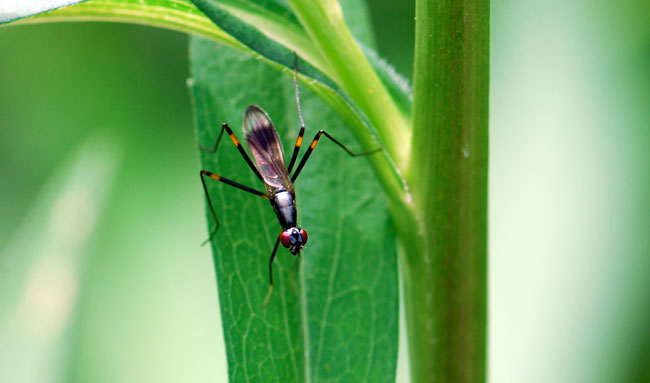 Here's a closer view. Why does this insect have red eyes? Why do you think it has such long legs? What are those orange marks on its legs?

In case you don't recognize it, the insect above is a stilt-legged fly, Rainieria antennaepes. Most experts think it is a parasitoid wasp mimic (like this one), but some of its relatives are ant mimics.

Although it is not readily apparent in these photographs, the tarsi or "feet" of the front legs are white. The insect holds its front legs out in front of itself and waves them around like antennae. The species name antennaepes means antenna foot, referring to this behavior.

You can see a fly of a closely-related species waving its front legs in this video. Keep alert for one scene that shows what the adult flies feed on. Look closely at the front of the head where the sponging mouthparts are found.

Did you see it? The adult flies feed on bird droppings and similar wastes.

Isn't that an interesting fly?