Sometimes rather than focus on a certain kind of animal, children want to investigate the groups of living organisms found in a particular habitat. This approach allows for a bigger picture of nature, from similarities and differences between animals found in specialized habitats, to how they all fit together into a food web.

Today we are participating in STEM Friday (see below) by featuring two new children's books  published this month that highlight habitats. Both these books from Animal Planet are loaded with big color photographs and plenty of entertaining sidebars, sure to entice young readers. "Just Like Me" sections highlight how the featured animal and humans are similar, further bringing the child into the book. The back matter of both is also impressively robust. They have suggested activities to accompany the book, an extensive list of resources, a large glossary, and a comprehensive index.

by Laaren Brown, which focuses on the polar regions.

As you can see from the images on the cover, this books deals with animals in cold places from polar bears in the Arctic to penguins in the Antarctic. In fact, maps of the two poles are included, as well as a sidebar with the average summer and winter temperatures in both regions.

Do you know what a bergy bit or a growler are? Not only does the book cover animals, but also other unique aspects of the habitat. (Bergy bits and growlers are different types of ice that can be found floating in seawater.)

Polar Animals is an enjoyable introduction to the animals in the Arctic and Antarctic regions. It has something from everyone because it offers both a fast facts and breathtaking photographs for the casual reader, and sufficient in-depth information for the more serious reader.

by Laaren Brown explores the unique creatures found in oceans.

In this case, the habitat is organized by depth of the water where the creature occurs. Most of the ocean creatures are found in the "Sunlight Zone" near the surface, but Brown also introduces what she calls the deeper "Twilight Zone," and the deepest "Midnight Zone." She also discusses the specialized organisms of hydrothermal vents.

In addition to introducing interesting animals, like the whale shark, the author also introduces important concepts. For example, many animals form large groups to help them survive in the vast oceans. Fish form schools, dolphins gather in pods, and sea birds fly together in flocks.

Ocean Animals makes a large and complex topic manageable for children to understand. In addition to being a resource for libraries, it would also be a good gift book to accompany a trip to the beach or an aquarium. 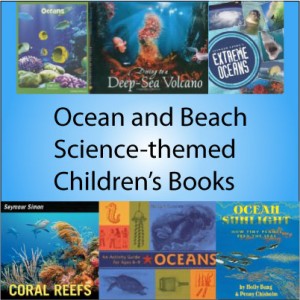 Disclosure:  The books were provided by the publisher for review purposes. Also, I am an affiliate with Amazon so I can provide you with cover images and links to more information about books and products. As you probably are aware, if you click through the highlighted title link and purchase a product, I will receive a very small commission, at no extra cost to you. Any proceeds help defray the costs of hosting and maintaining this website.