Upon revisiting the same plants again and again while searching for the bug of the week, I've made an interesting discovery. Although we think of insects as being highly mobile, a few do settle down for a period of time and make a plant their home. For example, the tarantula hawk from last week is still around. It seems to be a male and it has staked out one of our milkweed plants as his very own. We've started calling him our "pet" tarantula hawk wasp.

Going back to where I found the assassin bug earlier, I was surprised to find this adult assassin bug. The adult looks very different from the bright orange nymph. It is green with dark red on its wings. Would you have recognized it? I wonder if it the same one... 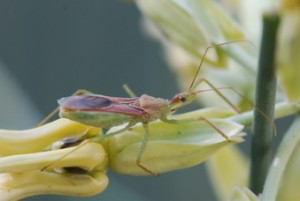 The cool, wet weather we have been having has brought out some mushrooms. Quick, are mushrooms plants or animals? If you say neither, then you know your stuff. Mushrooms were once thought to be plants, but mushrooms don't make their own food. Modern investigations have shown them to be more closely related to animals. For instance, mushrooms have the protein chitin, which is also found in insects. But mushrooms aren't exactly animals either. For example, as far as we know they don't run around like animals do. In fact mushrooms are so distinct, they are now given their own Kingdom, the Fungi.

What are fungi? Most people recognize that mushrooms are fungi. In addition, yeasts and truffles, molds, mildew and also disease-causing parasites of insects are fungi. Lichens, which grow on rocks in a variety of climates, are a mix of fungi and algae growing together. 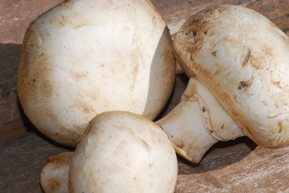 Fungi range in size from microscopic to quite possibly the largest organism on earth. Scientists are making the case that a giant fungus found growing in the Malheur National Forest in Oregon could be the world's largest individual organism, because it covers some 2200 acres. Information is still being gathered, and because much of the fungus is hidden from view, it also could be made up of clusters of individuals. 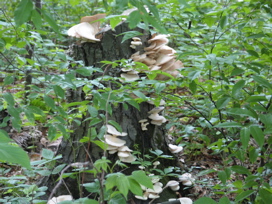 The mushroom part of the fungus we see is the reproductive part, or using older analogies, the fruit of the fungus. The body of the fungus is made up of threads called mycelium, and they are often hard to see because they grow underground or in rotting wood. If you have ever broken open a rotting log and seen white hair-like strands, you have seen mycelium.

If the mushrooms are like fruit, then where are the seeds? It turns out that fungi grow from tiny particles called spores. If you have ever found a mature puffball and stepped on it, the smoky clouds that come out are the spores being released into the air. Here is a picture of a puffball, if you have never seen one. The spores produce new strands called hyphae and then mycelia to make new fungi.

Fungi as Food
(Safety Note: Many wild mushrooms are poisonous. Beginners should stick to the grocery store varieties).
Explore edible mushrooms by visiting grocery stores to see all the different kinds that are available. We found shiitake, oysters, white, brown and portabellas. Discuss how they are similar and different. You might want to buy a few, and try the different flavors in your favorite recipes. You could also pick up some yeast and make bread with it. Show the yeast to your children and let them smell it. By the way, there is nothing better than white mushrooms sautéed in butter made into a sandwich between two slices of freshly made bread.

Make Spore Prints
If you don't want to eat the mushrooms, use a few different kinds of mushrooms from the grocery store to make spore prints. Try to find older mushrooms already producing the brown powdery spores. Young mushrooms with pink gills or button mushrooms aren't ready to make spores yet.

Place the mushroom with the frilly gill side against some white paper and then cover it with a glass or bowl. (You'll have to remove the stem first). Leave for a few hours or overnight. If the mushroom is producing spores, it should leave a print when you gently lift it away.

Scientists who study fungi, called mycologists, use spore prints to help figure out what species they have found.

Check out an experiment that uses yeast to blow up a balloon.

Older children can visit here to learn more about fungi, starting with the attack of the killer fungus.

Finally, if you have the time, growing mushrooms from a kit can be a great experience for kids. Kits are available with different types of mushrooms, at varying sizes and costs. Check the Internet for sources.

A Few Mushroom and Fungi Books:

Mushroom in the Rain by Mirra Ginsburg. Macmillan Publishing Co, New York. 1974.
A fiction picture book with a cute story.

Plants That Never Bloom by Ruth Heller. (nonfiction). Note: This older book still classifies fungi as plants, but the other information and illustrations are still worthwhile.

Today is overcast and windy, and most insects are settled in for the day. When I went out to search for the bug of the week, I was lucky to find this large insect resting on our milkweed plant. Being cloudy with gusty winds, it wasn’t easy getting a photo that was in focus. Here’s my best shot.

Check out the beautiful orange colors on the wings and the spiny legs. If you don’t recognize it, this is a tarantula hawk wasp. Belonging to the family of wasps known as the spider wasps, the tarantula hawk female searches for large spiders. When she finds one, she stings it and then drags it to a burrow she has prepared. Inside the burrow, the wasp lays eggs on the spider. The spider is still alive, but paralyzed. Over time it becomes baby wasp lunch.

Now take a look a something else. Can you see the yellow bit hanging from one of its feet? It isn’t in focus, so it may not look like much.

Here is a photo of another tarantula hawk wasp I took last year. Maybe you can see the bright yellow bits on the tips of its front legs more clearly. They are in pairs, and curve sort of like tiny maple keys. 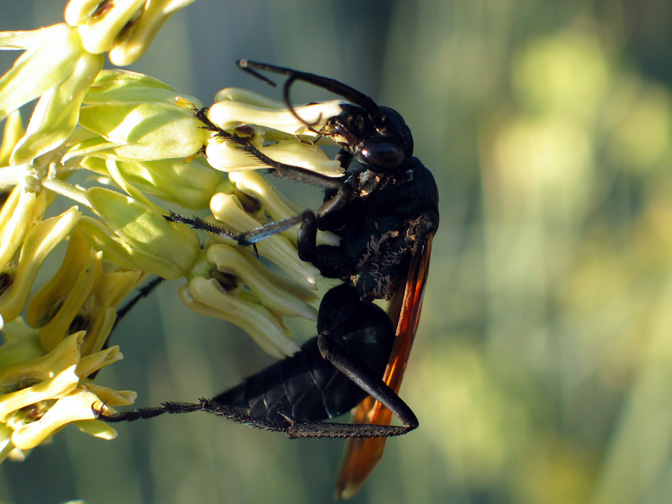 The tarantula hawk has a special relationship with the desert milkweed plant. Its slender legs fit into special grooves in the flower while it is drinking nectar. The grooves contain bundles of pollen called pollinia. The pollinia catch on the wasp’s legs. When the wasp flies to another milkweed plant, the pollen is transferred and the plant is pollinated.

If you look closely at this wasp you might be able to see the mud on its body where it has been digging its burrow, or perhaps from when it emerged from the burrow its mom built.