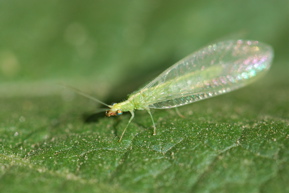 I just have to share the beautiful insect I found this morning on my hollyhocks. Look at the rainbow colors in her wings and her shiny golden eyes. She is so delicate and ethereal.

The lacewing is one of the many insects considered to be beneficial that you may find in your yard. Her larvae feed on other insects such as aphids, whiteflies and lacebugs. The larvae are like tiny alligators with curved jaws sticking out in front. If I find one, I'll try to get a picture to add here.

I have two ideas for today and they both have to do with fat.

First, did anyone read the Weekend Fun for making cheese? One of the cautions was to watch out because the milk can suddenly bubble up and over the pan when heating. I have had that experience a couple of times. I began to wonder why milk would act this way whereas water does not.

The answer goes back to the fact that oil and fat float on water. While heating, the milk fat forms a layer at the surface, repressing the activity of the liquid underneath. At boiling temperatures the fat layer splits all of a sudden, allowing the liquid underneath to roil up violently. Soymilk, with added oils, can have the same reaction.

How would you test this idea? I would suggest seeing whether heating nonfat milk had the same reaction. Then add oil to nonfat milk and do the test again. What happens? Do you have any other ideas?

The next part has to do with another kind of fat. Take a look at this article on how the species of bacteria in your gut during early childhood may determine whether you are obese later on.

I knew a little about how important gut microorganisms are in other creatures. My favorite critters, the insects, have many bacteria and/or protozoa inside them performing all sorts of roles. For example, termites can't really digest the wood they eat. They carry tiny organisms inside that are able to digest wood. Without them, the termites would starve.

Obviously we have a lot to learn about our own relationships with microorganisms.

Science News for Kids is an electronic newsletter available for anyone. Just visit the page and sign up. It has been uniformly high quality over the past year and contains useful, current and interesting information.

When I saw the little bee checking out me and my camera, I wondered what he saw. I did a little looking around the Internet and found a cool website by Andy Giger that gives our best guess for what a bee sees when it looks at an object. Since he says the images are available for downloading, here is what the bee might see when it looks at my face.

The images are black and white because bees see color differently than we do. They do not see red (one reason so many bird flowers are red) and they see colors in the ultraviolet range which we can't see. If I was wearing red lipstick, the bee would have probably seen something closer to black or dark gray.