Tomorrow we are going to be putting the spotlight on a great new children's book about zoology, which is the study of animals. To get ready, let's explore what we mean by the animal kingdom. What organisms are actually considered to be animals? This may seem straightforward, but it surprising how often even knowledgeable people equate animals with mammals and forget how very large and diverse the animal kingdom really is.

Remember how organisms are classified or divided into groups:  domain, kingdom, phylum, class, order, family, genus, and species (see an overview here)? Around the sixth grade, students are often introduced to the nine most common phyla, but there are actually more than 20. Let's start with learning about an even dozen phyla.

When studying phyla, what quickly becomes evident is that the majority of animals out there are invertebrates. Many of them are tiny, live in the ocean, and/or aren't all that well known. Be prepared for some eye-opening discoveries.

Take time to research the 12 phyla of animals listed below and then create a book or presentation with what you have learned.

When making the book or presentation, use your creativity. Consider making a slide show, video, or a series of infographics to help share what you learn with others.

Scrapbooks can be as simple as printing out photos, illustrations and text and gluing it into a spiral notebook. More elaborate versions can utilize commercially-available scrapbooks. Artists' sketchpads can often make a good foundation for a scrapbook, too.

For a slideshow, PowerPoint is the classic, but free versions of various slideshow creation software are also available for downloading. Slideshows can also be turned into videos.

Here is a list of 12 phyla of the animal kingdom and some basic information about each. 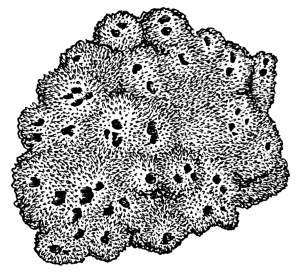 Sponges are the most unusual animals because they don't move (are sessile). They were thought to be plants until 1765 when naturalists discovered they are really animals. Most live in the ocean and all live in water. They have special cells with hair-like flagella inside internal canals that beat and move water through their bodies. The water movement brings in food and oxygen, and removes wastes. 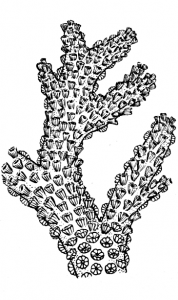 These two groups are sometimes combined into one phylum and sometimes separated into two.

Cnidarians lack organs. They usually have tentacles around the mouth which catch and paralyze small zooplankton or animals for food. The tentacles have stinging cells. See our earlier post about jellyfish.

(Illustration by the author)

The flatworms are different from the last two phyla because they have a distinct head end. Most are found in the ocean, although some are in freshwater and a few can survive on land in areas where it is very humid or moist. Some, like the flukes and tapeworms, are parasitic. 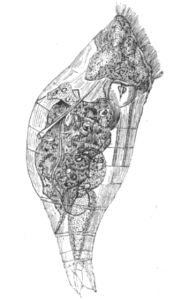 Rotifers have a ring of cilia around their head, or a "corona," which they beat to bring food particles, like bits of algae, to their mouths. Most live in fresh water. A few live in mosses.

Here is a video of rotifers feeding. 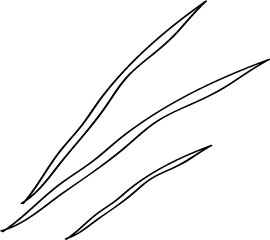 (Illustration by the author)

Nematodes are very slender worms that may be found in oceans, freshwater or in the soil. They can be found in virtually every habitat and sometimes are present in huge numbers. Some nematodes are parasitic on either animals or plants. 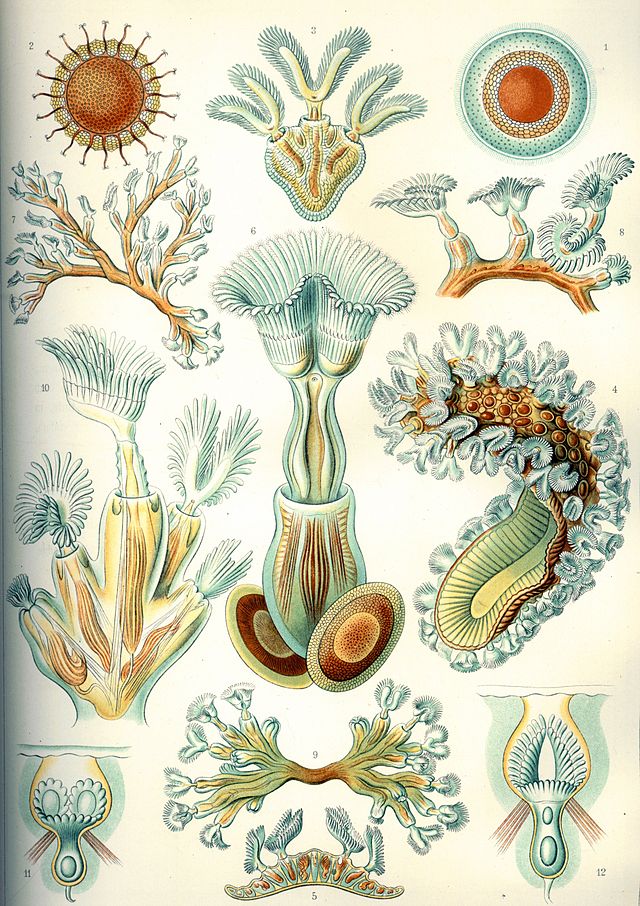 Members of the phylum Bryozoa are relatively unknown because they live in colonies in the ocean or freshwater. Like coral and sponges, they are sessile. Most individuals within a colony are less than 0.5 mm in length!

The members of the annelids include the familiar earthworms, leeches, and many lesser-known worms found in the oceans. Most burrow in the soil or in the bottom of the ocean.

8. Phylum Tardigrada - tardigrades
A short video showing a tardigrade in motion (with music).

Like the bryozoans, tardigrades (also called water bears) are very small animals. Most are around 0.3 to 0.5 mm long. Some live in oceans, particularly around algae. Many live in mosses. They are called bears because of their short, stubby clawed legs. Tardigrades have been in the news recently due to their amazing abilities to withstand low temperatures and drying out. 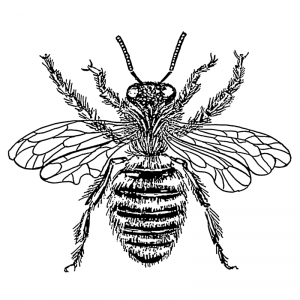 The arthropod phylum is the largest of the animal kingdom. The group name comes from the fact that arthropods move via jointed appendages. They have a hardened exoskeleton , usually made of some mixture of the protein chitin, that is shed or molted in order for the animal to grow. 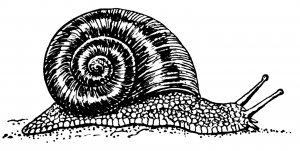 The mollusks are one of the largest phyla (second to arthropods). They can be found in the oceans, in freshwater and on land. Most have some sort of muscular foot used for locomotion, many have hard shells, and most have a rasping mouthpart called a radula that scrapes away at their food. 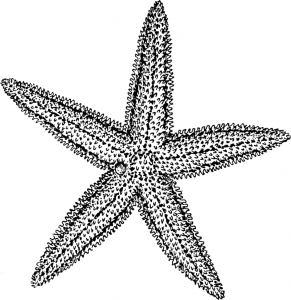 Echinoderms are large and familiar marine animals. They are named for their hardened body surface that appears spiny or lumpy. Besides the sea stars, echinoderms include the sea urchins, brittle stars and sand dollars. All are pentamerous, which means their bodies can be divided into five segments starting from the center. 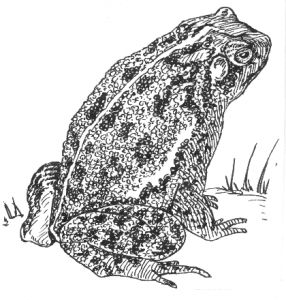 (Illustrations for 1, 2, 4, 7, 9, 10, 11, and 12 are by Pearson Scott Foresman - donated to the Wikimedia Foundation. Licensed under Public Domain via Wikimedia Commons.)

There you have a quick introduction to 12 phyla of the animal kingdom. Have fun researching them and let us know what you find out.

Note:  YouTube seems to be having some difficulty providing the videos I chose. Please let me know if they are giving you difficulty as well and I'll replace them.