Did you take a child outside this weekend? I didn’t because I was sick, but my husband did. To prove he was outside, here’s a photograph our son took: 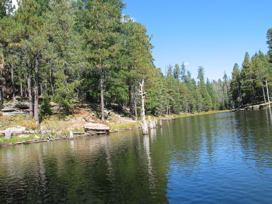 As you can probably tell, they were in a boat . 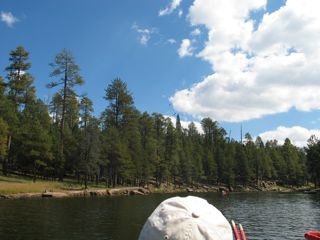 Probably can’t see them, but there are two dots over the tops of the trees, right about above the white hat. They tell me those are an osprey and an eagle. The guys were in a boat watching an osprey catch fish. The osprey had one successful catch and was trying again when a bald eagle came barreling in and chased the osprey. Guess it was quite a sight.

Bald eagles are known to chase and mob ospreys. Usually they seem to be after the fish the osprey caught. The eagle swoops at an osprey that has just caught a fish, and often the osprey drops its meal. Guess who gets the meal instead.

Although an osprey looks like a big bird when it is by itself, a bald eagle is much bigger and heavier.