Several weeks ago I wrote a post about a mystery in our back yard. You may recall that bits of glass were appearing on our patio and in our yard, particularly near where we had water available. I wasn’t sure how the pieces were getting there.

After reading my post, my son “confessed” he was the source of the glass chip. It was from a broken bottle. He also pointed out, however, that he had found bits of glass mosaic near another part of our lawn where water collects periodically.

As you may have figured out from the title of the post and the feather clue, I think the culprit is a bird. We have many birds that regularly visit our yard, including house finches and a variety of doves. But the evidence points to other regular visitors:  the great-tailed grackles, Quiscalus mexicanus. 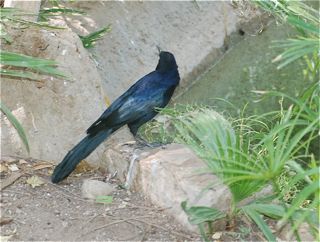 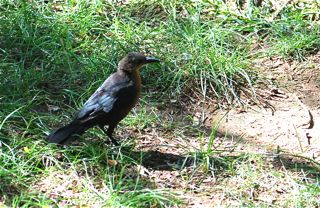 One of the most striking aspects of great-tailed grackles is the male’s display to females. The male raises his beak to the sky, straight up. A bunch of males often perform this behavior together. 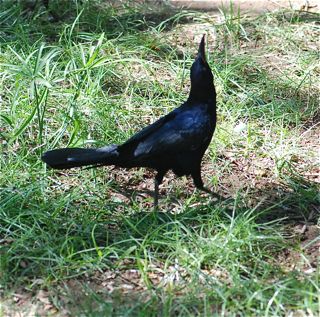 Why do I think the grackles may be involved in the glass mystery?

Many people have reported that crows and magpies are attracted to shiny objects, and often “steal” things away to their nests.

In fact, one of their relatives, the starling, has been caught in the act stealing money from a car wash.

We do get an occasional starling, but the grackles are in the yard for long periods every day.

Grackles are known to dunk hard pieces of food in water to soften them. For evidence, see this video. The video is rather long, but the section that shows the dunking behavior by the birds starts right after the written commentary.

Clue 3. Great-tailed grackles have been reported to drop chicken bones from trash into people’s back yards.

Clue 4. Grackles have been reported to toss berries or small stones to one another.

Although the evidence implicates the grackles, I have yet to catch them in the act. They are obviously smart and playful birds and it may be hard to find out for sure what they are up to. If I do, I will let you know.

If you are interested in bird behavior, check these books for more information.

The Life of Birds DVD by David Attenborough

If you are interested in birds and/or flight, this is a stunning movie.