The bug of the week is a tiny beauty with an attitude. When I first spotted this bug I thought she might be an ant. 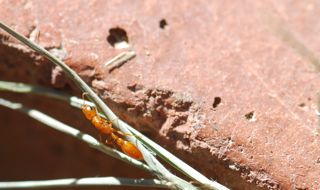 But then I looked again. This insect was just not acting like an ant.  She was climbing around on a plant like she was searching for prey, more like a wasp. 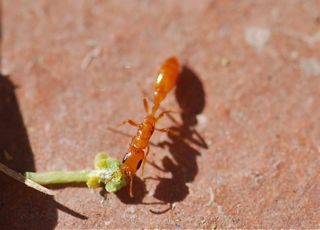 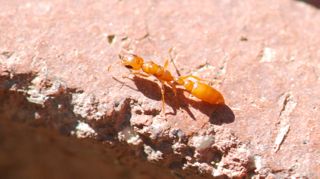 She doesn’t look quite like an ant either. Her antennae are not elbowed like an ant’s would be. Bug Guide has some pictures of bethylid wasps that look fairly similar to this one, although I couldn’t find an exact match.

Edit: I guess first impressions were best. Seems this is a Pseudomyrmex ant. Check this photograph of Pseudomyrmex pallidus. Thanks to Cameron for straightening me out.

Bethylid wasps are parasites* of caterpillars and beetles larvae. Even the small ones like this have a potent sting. They use their stingers to immobilize the host larva, and then lay their eggs on it. The wasp larvae that hatch from the eggs use the caterpillar or beetle grub for food. Because the hosts are often pests of crops, these bethylid wasps are considered to be beneficial insects. Just leave them alone if you are lucky enough to see one.

*A parasite uses one host that is bigger than itself for food. A predator catches and eats many smaller prey items for food.