This week the lemons are literally falling off the tree, so it is time for a round up of science experiments with lemons. 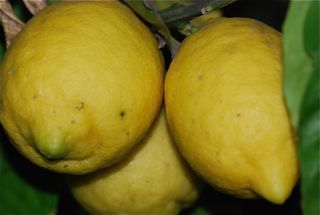 Lemon soda/pop
One of our favorite crazy chemistry projects is to try to reconstruct soda/pop flavors using ingredients found around the house and some fizzy water.

If you supply a lemon soda to imitate, tape a piece of paper over the ingredients until the children have tried some recipes. Certain of the ingredients in citrus-flavored sodas were unexpected to us.

Or just allow them to create something that tastes good.

Have the children measure a standard amount of carbonated water into a glass and then add flavors. We’ve done this many times with many different friends and we’ve found that everyone enjoys it once they realize they are truly being given free rein to experiment.

Lighting up an LED with a few electrodes, wires and lemons is really exciting and it does work, although it is not easy.

Hints:
1.    Use more than one lemon. Three or four hooked together works best, with two electrodes per fruit.
2.    Make sure you alternate electrodes, zinc/copper/zinc/copper. The zinc is negative, copper is positive.
3.    The LED also has a positive and negative orientation, so make sure it is in the circuit in the correct orientation. The slightly flattened side is the negative side.
4.    A trick I learned the hard way is to place the electrodes pretty close together. The figures often show the electrodes at opposite ends of the fruit, but moving them closer to each other works better.

This CSIRO site shows how to set up the lemon battery with the electrodes close together.

Lemon Juice as an Acid
Ever make a fizzy volcano or a film canister rocket with vinegar and baking soda? You can substitute lemon juice for the vinegar and still get similar results. If you add a squeeze of dish detergent with the lemon juice before adding the baking soda, it will froth even more.

Germinating Lemon Seeds
Save the seeds of the lemon when you make lemon juice. Wrap them in moist paper towel as described in the germination test post and keep them moist. In time, the seeds should sprout and you can grow small lemon trees. Lemons are susceptible to freezing, so only set them outside when temperatures are above freezing.

For the botanists:  Interestingly, many citrus can produce seeds without the flower being pollinated. Those seeds are identical to the parent, rather than being a mixture of traits. 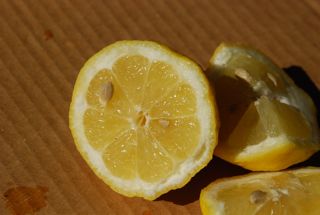 We have talked about science with lemons before in previous posts:

When studying acids and bases, use lemon juice as a test substance. If you want to make a soft cheese, lemon juice can be used to curdle milk.

When you are finished, celebrate your science by making some lemonade, lemon cookies, lemon pie or lemon bread. Yum!

Let us know how your experiments turn out or if you have any great ideas for using lemons in science experiments.