Anyone in your family interested in cars and physics? Even if you don’t realize it, working with the first thing can teach you a lot about the second. Today we’re going to look at Newton’s Three Laws of Dynamics using toy cars.

1.    Newton’s first law states that an object at rest stays at rest, and an object in motion stays in motion, unless acted on by an external force.

To test the object at rest part, place a small block or action figure/doll on a car (even a penny will work). Push the car, taking care not to push the object resting on it. Usually the block or doll will “stay put” by falling off, or at least falling back, while the car rolls away.

Now roll the car with the block or doll riding on it towards a barrier, such as a book or larger block. When the car hits the barrier, what happens to the rider? Does it fly forward? The rider is trying to remain in motion even after the car stops.

A child may wonder why, if an object does indeed remain in motion, does the car eventually stop rolling? Think of some other forces acting one the car that we might not see. How would you test this?

Raise a piece of cardboard on books, blocks or a piece of furniture. Roll cars of different sizes and weights down the ramp, or add weights to cars of the same size (you can tape on pennies). Do bigger cars go farther and/or faster?

Now push the cars rather than simply letting them roll. See any difference?

Older children can actually calculate the force by weighing the cars and timing them.

3. For every action, there is an equal and opposite reaction.

Most children are more than willing to crash their toys cars into each other to test this theory.

You can save wear and tear on the vehicles by creating demolition derby vehicles out of the bottom of a plastic egg and a marble. You can decorate the egg with a sharpie marker. Place a marble under the egg and roll it away. See what happens if you add smaller, larger or more marbles under the egg. What happens when two plastic egg racers crash? 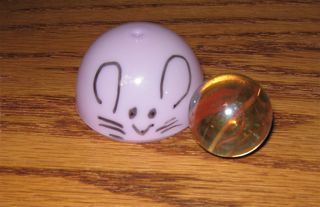 NASCAR Physics for the Older Set
The Science of Speed is a series of 13 videos at http://science360.gov/ that relate physics to what you see on a NASCAR race track. Just click on the circles under the “Science of Speed:” text to navigate through the videos. Topics include drafting, tire pressure, and friction and heat. Note: there are car crashes.

Thanks to Karen of Leaping From The Box for contributing the NASCAR link. If you are a NASCAR fan, try her racing blog.