Any idea what this alien-looking creature is? 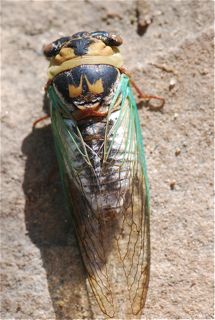 Cicadas are large insects with bulging eyes. This one is whitish because it has a fungal disease. 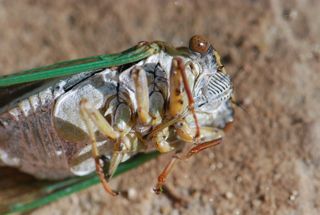 Father’s Day marks the beginning of the cicada season here in the Sonoran Desert. The emergence of these noisy insects predicts the beginning of a change in the weather, with higher humidity and the onset of the violent rains called monsoons. Unlike the spectacular periodical cicadas, our cicadas emerge every year. They sing on and off for a month or so.

Ever wondered how the cicadas produce their loud buzz? On the sides of the male cicadas (although some females have them, too) are two thin areas called tymbals. When muscles inside pull on the tymbals, they collapse causing a click. When the muscles release, the tymbal clicks again as it snaps back.

The video of the tymbal moving in slow motion at Discovery Channel's Time Warp: Cicada Sounds is very cool.  The tymbal is the white area that is moving in and out. Too bad there isn't any sound to go with it.  Note: the short advertisement at the beginning of this video may not be appropriate for young children.

According to the schedule, the entire Time Warp episode with the cicada footage (it is called Stuntmen) is being aired on the Discovery Channel on Monday June 21 at 9:00 am. It is rated TV-PG. It might be a fun way to start summer.