Are you ready to find out what the mystery insect was in last week's post? 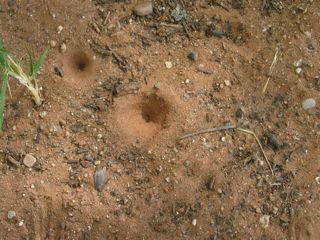 Most of you probably noticed the two circular depressions. The creature at the bottom of those funnel-shaped pits is the larval stage of the ant lion, also called a doodlebug. Ant lions are found in warm areas throughout the world, including Florida and the southwestern United States.

If you were to dig out the bottom of the pit, you would find the ant lion larva, which looks a bit like a lacewing larva and the two are related. Here's a photo of an ant lion larva from Iowa State University. Some species have even longer jaws.

The ant lion larva digs a pit in loose dirt or sand near ant colonies. They spiral around and around from the surface down to the lowest point, creating a steep and slippery slope. The ant lion prefers to dig in areas with fine sand, and maintains the pit by throwing out any pebbles or bits of plant that might fall in.

When an ant or other small insect falls into the pit, the larva flicks sand at it to knock it towards the bottom. Once the ant is within reach, the larva grabs it and drags it under the sand and eats it. Don’t feel too bad though, many times the ant is able to scramble out of the pit unharmed and the ant lion often goes hungry.

When the larva attains its full size, it pupates. The pupa is round and covered with a layer of silk and sand, similar to that of the lacewing. The adult ant lion emerges from the sand. It is slender with wings with many veins that fold back over its body when it is at rest. The adult might be mistaken for a damselfly or dragonfly. Firefly Forest has a fantastic photograph of an adult ant lion, go on over and take a look.

Have you ever seen an ant lion?

2 thoughts on “Bug of the Week: Ant Lions”