Wind, or the movement of air, can be a powerful thing. People have used the wind to do work for hundreds of years. From sailing ships to modern wind turbines, the wind has been harnessed for many useful purposes.

This week we have been investigating how air movement works with various pinwheels, windmills and propellers.

You can learn about wind using a household electric fan. Be sure to remind your children about safety around fans, such as never sticking anything into the moving blades.

Give each child a feather or piece of tissue and allow them to blow on it. Let them free explore, seeing how the feathers lift and fly as the air moves. When they are finished, turn on a fan. Allow them to drop their feather in front of the fan. Does the feather move differently? An actively working air return vent can also work if you don't have a fan. Repeat using tissue streamers, if available.

If possible, let the children try this outside when there is a breeze.

Make or obtain a windsock (see windpower.org, for example)

How to make a weatherproof windsock video

and/or tie a few long streamers of cloth or ribbons to a wooden dowel
and/or make or obtain some wind chimes.

Hang the windsock, streamers or wind chimes outside. Watch them often. Discuss whether the day is windy or calm. Explain that windsocks are found at airports, The pilots need to determine the direction and strength of the wind when they take off and land the planes.

There are hundreds of ways to make pinwheels on the Internet. Here is one way to make a simple pinwheel.

Have and adult place the pin through the center of the pinwheel and push into the side of the pencil eraser. The pencil will be the handle. Be careful with the pin around small children. Place the modeling clay over the sharp end of the pin to hold it in place. Now gently bend one corner down on each wedge, making sure to create the same angle with each. 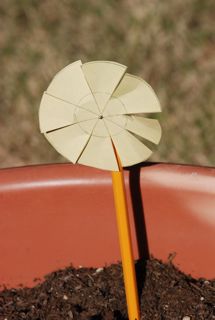 Blow on your pinwheel or push it through the air holding the pencil. It should spin as the air hits it. Putting it in from of a fan is fun too.

Windmills are basically pinwheels that do work of some kind. In the past windmills were used to grind grains, make paper, extract oils from seeds, and pump water, among other things. These days people are investigating many ways to generate electricity using wind.

This is a video of three example windmills. Note: the quality of the video is slightly better at the original website.

If your children are interested in making a model of a windmill, Tinker Toys have some useful parts, such as hub wheels.

The Wind at Work: An Activity Guide to Windmills by Gretchen Woelfle

Cool book about the history of windmills.

Can you believe it? You can get a windmill at Amazon!