Someone asked me about sawflies recently, so I thought I'd tell you a little about these commonly overlooked insects. 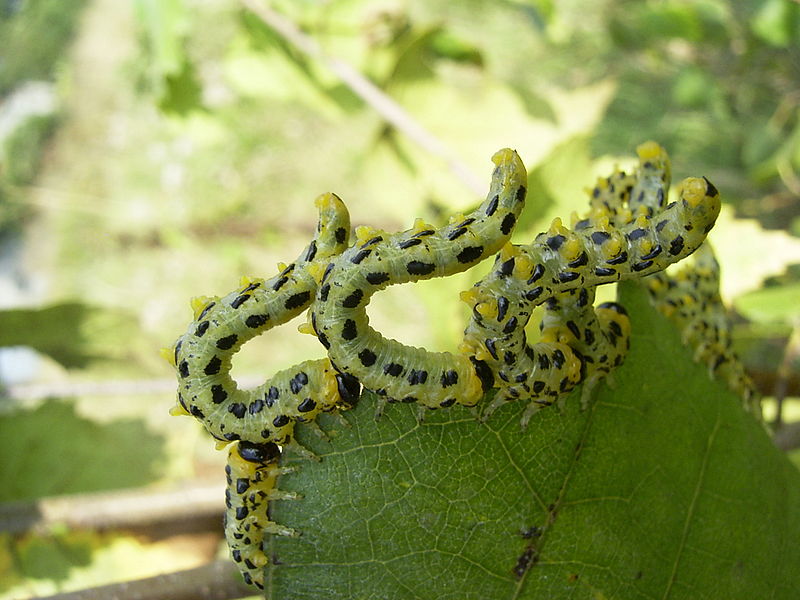 (This photograph is from Wikimedia by Lilly M.)

The colorful larvae in the photograph will become sawflies. Don't they look like caterpillars?

If you look closely at the rear part or abdomen, you will see that there are six or more pairs of prolegs, one on each segment (see butterfly science post for a description of prolegs). Caterpillars lack prolegs on some segments, and thus have five or less pairs.

The larvae often fall the the ground and pupate in the soil. They will emerge as adults that are flying insects with four wings and thick waists.

This is photograph of an adult of another species (from Wikimedia)

Sawflies are relatives of bees, wasps and ants. If you could imagine Hymenoptera family tree, then the sawflies would be at the trunk, with the bees, ants and wasps forming the branches.

The larvae feed on plants, often on conifers. The larvae of many species feed in large groups, and display collective alarm behaviors. In the photograph above the sawfly larvae are displaying their abdomens. In other species all the members of the group may rear up suddenly when they are threatened, startling any potential predators. You can see rearing sawflies in action in this short video from the University of Kentucky.

Pretty scary isn't it? I know I wouldn't want to eat one.

Have you ever seen a sawfly before? Are they common where you live?

1 thought on “Bug of the Week: Sawflies”