Yesterday we featured a book about tarantulas and asked some questions about them, Today we have the answers to those questions, using the illustration. 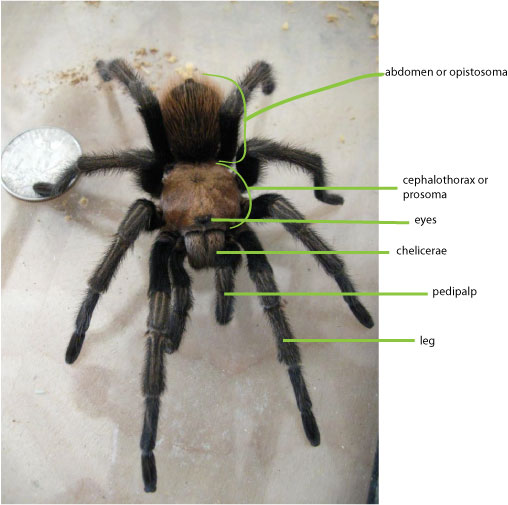 1. Find the legs and count them. Are there eight legs?

Yes, tarantulas have eight legs like other spiders and arachnids.

2. What are those two appendages in front of the tarantula?

Those two shorter appendages at the front of the tarantula are not legs. They are called pedipalps. They are used for various purposes other than walking.

3. Can you find the eyes? Do you know how many eyes a tarantula has? Is this more than, less than or the same number as other spiders?

Tarantulas have eight small eyes. That is the same number as most spiders. One exception is the brown recluse, which has only six eyes.

4. Where are the spinnerets to make silk?

Tarantulas have spinnerets at the back of the abdomen. In this photograph they only show as a slight bump. Both males and females make silk. They use it to line their burrows. Tarantulas do not make elaborate webs.

5. Is this a male or female spider? How can you tell?

Based on the fact this spider was found out wandering around and that it has extensive black coloring on its legs and abdomen, it is reasonable to assume it is a male.

Mature male tarantulas have a hook on the tibia of the front leg, which is not visible in the photograph.

How did you do? Are you a tarantula expert?

Be sure to let me know if you have any other questions about tarantulas.

20 thoughts on “Answers to Tarantula Questions”