The trees of eastern North America have been having it tough in the last century or so. First the American chestnut was wiped out by the chestnut blight fungus. Then the American elms were killed by Dutch elm disease, which is carried by a tiny beetle. Many forests were ravaged by an outbreak of gypsy moths in the 1980s. More recently ash trees are being killed by the emerald ash borer. In a new middle grade nonfiction book, Beetle Busters: A Rogue Insect and the People Who Track It  (Scientists in the Field Series)

by Loree Griffin Burns and illustrated by Ellen Harasimowicz, we learn about another insect that is attacking hardwood trees:  the Asian longhorned beetle.

The North American infestation of Asian longhorned beetles, Anoplophora glabripennis, was first noticed in 1996 in New York City. Because the beetles don't move far from their emergence site, officials decided the best policy is to destroy all infested trees by cutting them down and chipping them in an effort to eradicate the insects.

Eradication, or complete removal of an organism from an area where it is unlikely to re-occur, has been used with mixed success against insects (see for example, Eradication and Pest Management, Annual Review of Entomology, Vol. 43: 471-491, 1998). In her Author's Note, Loree Griffin Burns admits that she questioned whether attempting to eradicate the beetles from her community in Massachusetts by cutting down and chipping many trees was going to be a successful tactic. In an effort to find out more, she gathered the materials that would eventually become the book. 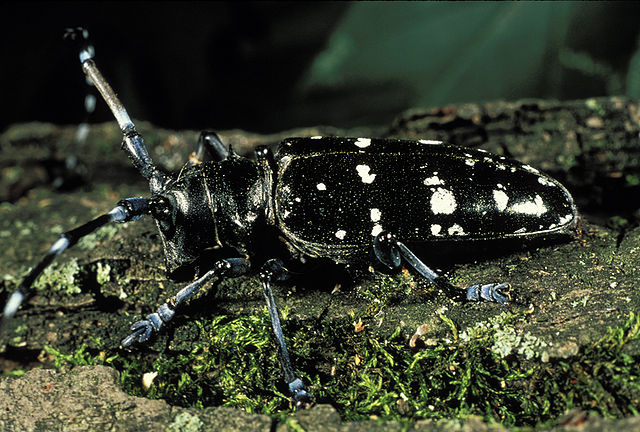 Beetle Busters contains information about the life cycle of the beetle, the history of its introduction to North America, details about how scientists are studying the insects, and a in-depth explanation how concerned citizens can get involved. Burns also reveals some information about how cutting down trees changes habitats and some evidence that ecosystems can recover eventually through succession.

This book is another wonderful addition to the award-winning Scientists in the Field series. Although written at the middle grade level, it will be a valuable resource for older readers, as well. If you live in eastern North America and are interested in nature and science, and particularly in trees, this book a must read.

The USDA has a website with information and links for reporting sightings of the beetles (http://asianlonghornedbeetle.com/) with a link to a page of useful resources for educators.

Disclosures: This books was provided by the publisher for review purposes. I am an affiliate for Amazon, and if you click through the linked titles or ads and make a purchase, I will receive a small commission at no extra charge to you. Proceeds will be used to maintain this self-hosted blog.